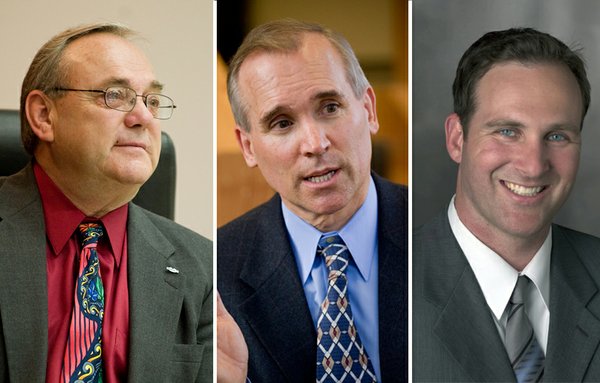 He returned to work Wednesday, still looking a bit tuckered out from the flu, but with a message for his fellow commissioners on their CRC decision.

“You asked CREDC to be neutral…yet you weren’t willing to do the same yourself,” Stuart said. “You’re asking others for neutrality, but not expecting it of yourself…that’s hypocrisy.”

There are a lot of moving parts to that statement. First, the county pulled funding from the Columbia River Economic Development Council (CREDC) in January, asking them to take no stance on the issue of the CRC. Second, commissioners passed the already mentioned resolution opposing the CRC on Tuesday. And third, commissioners Madore and Mielke decided at a Wednesday meeting of commissioners to ask the Greater Vancouver Chamber of Commerce to take no stance on the CRC before the county pays its annual dues of $1,500. (UPDATE, 2:45 p.m.: Stuart said Madore suggested Thursday, to County Administrator Bill Barron, that the county does pay its dues while still requesting the chamber take a neutral stance on the CRC. Stuart said he seconded the payment over the phone to Barron. “Mr. Madore, to his credit, suggested going ahead and paying the invoice,” Stuart said. ” The relationship will continue.”)

The culmination of those actions prompted Stuart to chide his fellow commissioners for what he sees as a lack of logic.

“You are asking something different of your partners than you do of yourself,” Stuart said, then explaining the reasons he felt the decisions lacked a logical cohesion.

Here are some of the sticking points for Stuart:

Madore and Mielke both stuck to their guns during the discussion, saying they are following the will of the people who voted against light rail in November.

When they voted to approve the resolution on Tuesday, Madore said, “the overwhelming opposition to this project has been evident.” Mielke added that the project has been, “a blank check that you and I have been paying for.”

Stuart said on Wednesday that he knows he won’t agree with his fellow commissioners on the CRC, but asked them to consider the consequences of their actions as he believes the county is “dropping good partners in the process.”