State of the County bingo 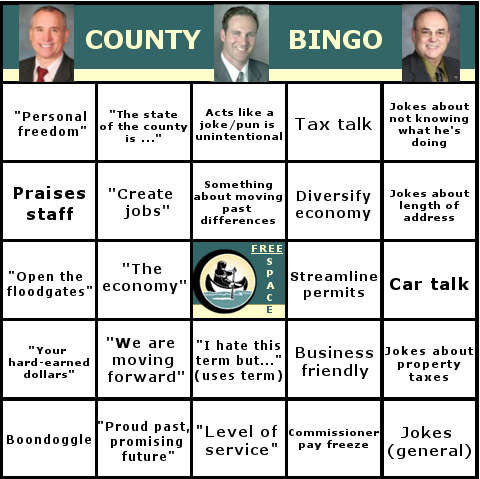 Topics will include the county, and its state, I assume.

In all honesty, I have no idea what the speech looks like. Master of ceremonies and board chair, Steve Stuart, has kept me in the dark on what’s going on. The veil of secrecy could be disguising some big announcement, or it could be Stuart just messing with me for his own amusement. Who knows?

If we are left to guess about such an affair, we should at least make a game of it. It should be noted that while the items under the photos do correspond with who I expect will say such things, I’m going to count all items across the board. Joking about the length of the address, for example, could go to any of them.

Same goes for the quotes and themes in the remaining columns. It’s all a grab bag, folks.

Still, if Commissioner Tom Mielke doesn’t crack a single joke, I’ll be bummed out. And the state of the meeting will be gloomy.

For posterity, here is what has been talked about leading up to the address: