Sept. 10 update: How each state is handling high school football this fall 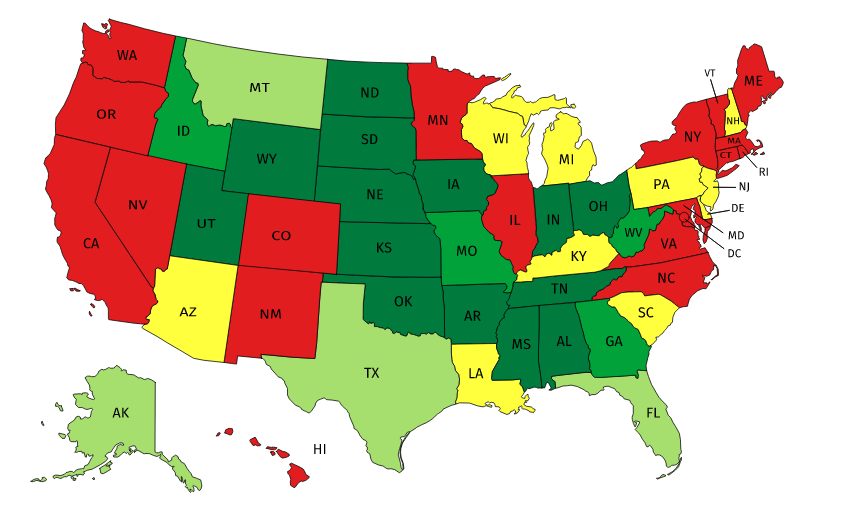 We’ve adjusted our map on the different stages of high school football across the country.

We’ve broken states up into three basic categories: Green (23 states), Yellow (10 states) and Red (18 states, plus the District of Columbia).

Green indicates that the high school football season has started in some section of that state. Deep green (15 states) indicates most, if not all, of the state has begun playing, although some states (Ohio, Kansas, Iowa) have abbreviated or altered their seasons from normal). Medium green states (three states) are playing football in most of the state, but a significant chunk of the state still has not started. And light green (five states) are states where football has started mostly for rural and/or small schools, but larger schools in larger cities have not started.

Here’s a breakdown about how each of the 50 states, plus the District of Columbia, are handling the high school football season, as updated on Sept. 8. We will update this every week.

ALASKA: Most of the state has opened the season. But Anchorage schools, which represent about about 40 percent of the state’s total population, just started practice Sept. 4. First games are expected to begin Sept. 18.

DELAWARE: Previously delayed to 2021. But on Sept. 10, DIAA board of directors voted to bring football back with games starting on Oct. 23. DIAA decision must be approved by the State Board of Education on Sept. 17.

IDAHO: Most of the state has opened season. But several schools in the southern end of the state around Boise delayed start of the season until at least Sept. 11.

KENTUCKY: Most of the state will open season on Sept. 11, but some schools won’t begin play until Sept. 18.

PENNSYLVANIA: State is widely divided. Some parts of the state will begin Sept. 11. Others parts will open Oct. 2. About 15 percent of the state has decided to delay to spring.

SOUTH CAROLINA: The start of the season has been delayed three weeks to Sept. 25, season abbreviated to seven games.

VERMONT: Opted to cancel fall tackle football season and replace it with 7-on-7 touch football,. Teams will play twice a week between Sept. 25 and Oct. 24.

WEST VIRGINIA: Season started Sept. 4, but schools in nine of the state’s 55 counties will not be allowed to play in Week 2 because of COVID hotspots. Other teams canceled games in Week 1 because they had not met minimum number of practices.

WISCONSIN: Delayed the start of the season three weeks to Sept. 25, and shortened season to seven weeks. Also provided an alternate seven-week football season in the spring, if games could not be played in fall.