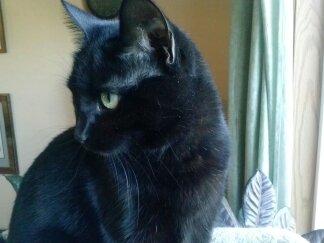 I remember the day my mother, sister and I went to pick out our first cat.

The room was small and noisy and the walls were lined with cages, filled with cats of all ages, sizes and colors. I remember my sister and I looking at each cat, carefully considering what we wanted in our new furry friend. We found two kitten siblings tucked into one of the corners, a little male tabby with big ears and paws and a dainty female black cat with pretty gold eyes. The tabby was outgoing and called out to us — we just had to hold them. My sister held the little black cat and was immediately in love. Pinned to the fronts of some of the cages, including the one that held the two kittens, were laminated cards with pictures of black cats and phrases. Each had a different reason to adopt a black cat, with the number one reason being black cats are the least likely to be adopted. That sold us, we had to get the little black cat.

Five years later and our little black kitten now owns the house. She didn’t get much bigger, but she has a huge personality to make up for her small stature. She’s outgoing, playful and is the boss of our two boy cats, despite the fact that they are twice her size. It breaks my heart to think she might have been passed over just because she is a black cat and that thousands of other cats are passed over in shelters for the same reason.

No one is quite sure why it’s hard for shelters to find homes for black cats. There’s no actual statistical evidence to support this, but there’s plenty of anecdotal evidence. Some think it’s because they’re hard to photograph, making it difficult to promote them online or through posters. Others think it’s because of the association between black cats and the supernatural — black cats are supposedly bad luck.  A study through the University of California: Berkeley didn’t determine what was causing this problem, but did find that people were more likely to assign bad traits such as being antisocial or aggressive to black, white and tortoiseshell cats.

I’ve become quite the cat person since we adopted our little girl. She’s an amazing cat and brings a lot of joy, and humor, to our lives. I’m happy that we picked her and really hope that people are giving black cats a chance. They’re wonderful cats.