Adding to the menagerie 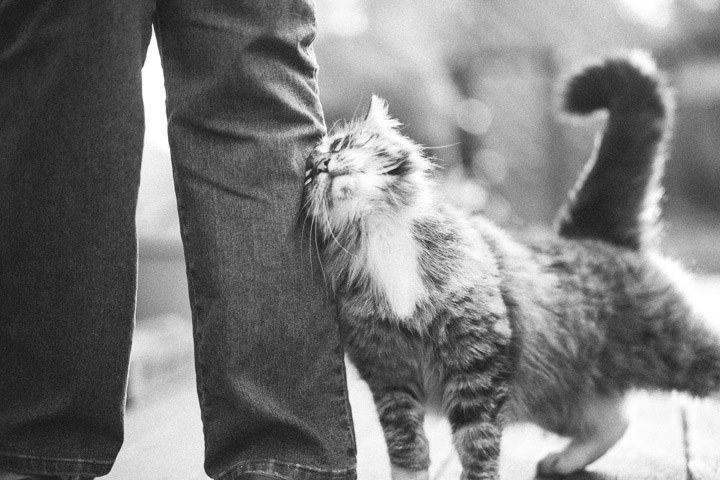 My parents have adopted another cat. This brings the total in their house to three plus one corgi/German shepherd mix. They weren’t really planning to adopt another animal but I know Jethro had been weighing on my mom’s mind for quite awhile. Jethro was originally the neighbor cat. He was this big fluffy, amazingly aloof feline when he moved in next door. We would see him, but it was years before Mom or I got anywhere near him. Then his owner adopted a dog that was part wolf. She was a sweet dog and remarkably well-behaved (no howling at the moon or anything) but Jethro didn’t want anything to do with her. At which point he started living under my parents’ deck.

Mom figured Jethro would be perfectly happy to go back home when the weather turned. But it got cold, and Jethro was still spending a lot of time in their yard, much to the consternation of Julius, my parents’ big orange tabby. At this point, Jethro is still taking off when anyone comes near him, and while Mom and Len both thought about trying to do something about Jethro, he wasn’t their cat. One day the following summer, I was heading home from their place when I saw Jethro lounging under my car. I didn’t want to start the engine with him under there so I walked up the car expecting that the moment I got close he would take off. Instead, he emerged and let me pet him. And pick him up. Maybe all this can be laid at my feet, because from that day on, Jethro wanted to live in my parents’ house. He would try to go in the back door any time it opened. He climbed the screen. He would take naps in the window box — on top of my mom’s begonias — while my mom was doing dishes. The aloof cat had disappeared and in his place was a fluffy, cuddly cat that had so much affection to give — and desperately wanted to be someone’s cat again. But he still didn’t get a long with Julius. And in my parents’ mind, he still belonged to the neighbor.

He was being fed — occasionally by my parents — but he was getting skinny and he just seemed so miserable. Which I think is when my mom started thinking about asking the neighbor about adopting him.

Mom and I went shopping on Friday and actually talked about Jethro. She was concerned about overstepping, which good fences make good neighbors and all that. But the next morning, Mom popped outside and noticed the neighbor was having a moving sale. He was moving and couldn’t keep his animals. So mom offered to take Jethro. Serendipity.

Julius seems to have come to terms with all this, mostly. Their other cat, Katie, just hides in the bedroom a lot — which she did before Jethro moved in. And the corgi mix? Well, as far as Jethro’s concerned, Abby is his dog.

Not sure how Abby feels about that.