The story of Rory 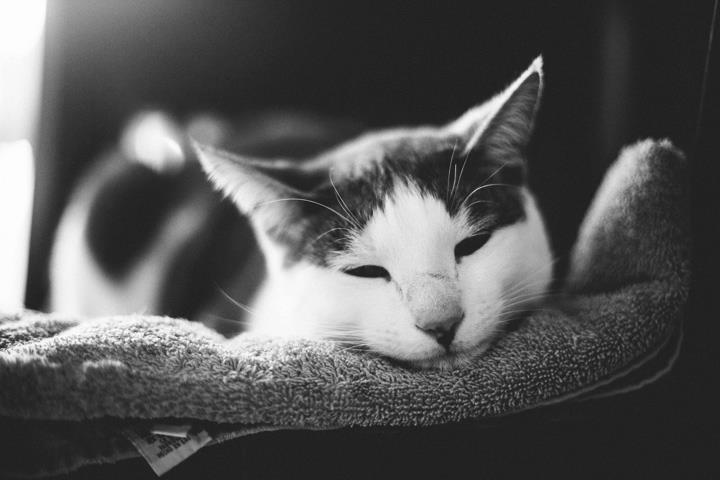 My husband is mostly a dog person. He’s an animal lover who loves all animals equally, but he loves dogs and turkeys and goats a little more equally that he loves cats. Enter me: Serious Cat Person.

When we moved in together, I had a cat, who got along just fine with the Shiba inu/Corgi mix he had. My cat, Giles, died in the fall of kidney failure. He was about 14 years old and had a good life. But in the time my husband Bob lived with him, Giles slept a lot and rarely did much. He had always been a quiet cat but in his later years was even more so, content to lay on the deck in the sun or sit in the window watching the world. Rory on his first day home.

After Giles died, Bob encouraged me to adopt another cat. We had the space and the room in our hearts for an other animal so we headed to the Humane Society for Southwest Washington and after a lot of looking decided to adopt this little cat that they told us was a year old. We wanted an older cat — maybe 3 or 4 — but he was so cute and sweet and took to both of us so quickly that we couldn’t resist him.

After getting him home — and treating him for the cat version of kennel cough — his real personality and his actual age started to shine through. He was into everything. We woke up at 5 a.m. to the cat clawing the wicker hamper in the bedroom. He was impossible to keep off counters. And he drove the dog nuts. Lily is about 8 and pretty patient with him but I once saw him hanging upside down from her belly while she tried to get away. Our low-to-the-ground Corgi mix was not amused.

We adopted a kitten and an energetic one at that.

My husband works from home — he’s a photographer and a kiltmaker — and despite his not really being a cat person, Rory worships him. So no matter where he is working, there’s the cat. And Rory has grown on Bob in the last nine months or so. Rory has mellowed some and does have the occasional quiet moment. Luckily the Gordon plaid the cat is laying on is machine washable — and for my husband. But really he’s always trying to be cat helpful. Cat helpful shouldn’t be confused with actually being helpful. Cat helpful is more along the lines of laying on the project you’re working on so you don’t lose it. It often manifests in the form of the cat sprawling across his cutting table “guarding” whatever he’s working on.

Anymore Bob finds it funny — mostly. I find it less funny when the cat decides to help me organize my knitting yarn by attacking it from under the couch. They really are playing. The cat just keeps coming back for more until Lily runs for a hiding spot.

Looking at the photo of our first day with him, I can’t believe we ever thought he was a year old.  He’s doubled in size and has amazingly long legs that he uses to jump on top of pretty much anything he wants — the polar opposite of our short-legged dog.

Lily tries to be patient. She sometimes fails. But she is a dog after all. And they get along just fine when the cat gets mushrooms or french fries or kale chips off the counter and shares them with her. They have the classic brother and sister relationship. She wants to play when she wants to and he wants to play when he awake.

I think Bob just wants his cutting table back.