Prayer on the agenda 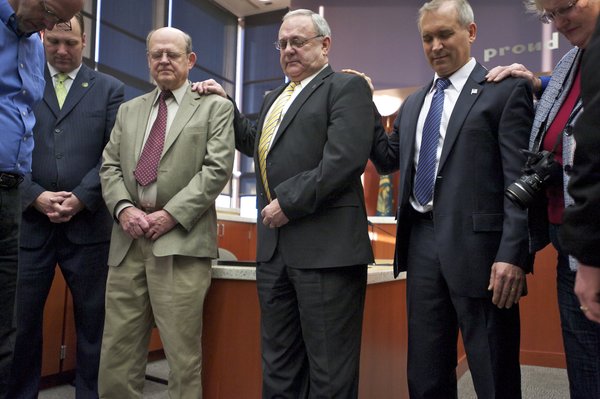 The prayer time before public hearings that Clark County Commissioner Tom Mielke has been pursuing will be discussed this coming Tuesday, and will very likely go to a vote.

The resolution for the prayer is available here.

This right here is probably the most important text of the document:

“NOW THEREFORE, BE IT RESOLVED, by this Clark County Board of Commissioners that we do hereby request the presence of clergy and others to have the opportunity to say a prayer to open each meeting of the Board of County Commissioners for up to two minutes. This time shall not be used to lobby or advance a particular religion or disparage another faith or belief. The primary purpose of this practice will be to seek wisdom and guidance as the Board makes critical decisions affecting the lives of Clark County citizens.”

Some folks have come to public comment periods to tell commissioners they should expect a lawsuit if they proceed. A county attorney has said the resolution is “legally sound.”

Mielke said all faiths will be invited to participate. When specifically asked about non-Christians or pagans or atheists, Mielke has stayed the course and said all will be welcome. The commissioners had a bit of a straw poll moment at board time this week. David Madore indicated he supported the resolution and Steve Stuart said he won’t be voting for it.

Stuart took part in a prayer during the January swearing-in of Madore and Mielke, but when discussing the matter in the meeting he said he’d done some thinking on the issue.

“From my perspective the people don’t pay us to pray,” Stuart said. “I will continue expressing my religion and my religious beliefs in the way that I’m taught, and the way I was taught as I grew up.”

“I’m good with you guys doing it,” he said. “I respect your ability to do it. I respect your desire to move forward with this. I simply will not be participating, nor will I be supporting it.”

The matter will be brought up at 10 a.m. Tuesday at the commissioners’  hearing on the sixth floor of the Public Service Center, 1300 Franklin St.