My daughter the lobbyist 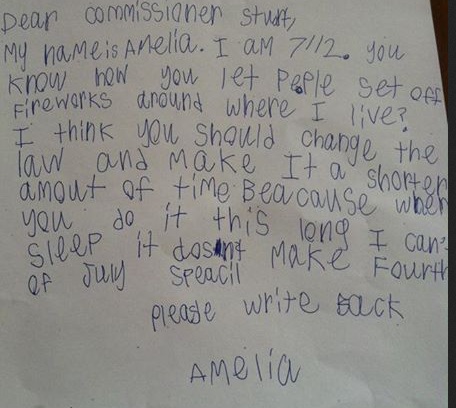 As a reporter, I don’t sign petitions, give testimony during public meetings, put political signs in my yard or even join the PTA at my eldest daughter’s school, as PTAs endorse school funding ballot measures.

But I fully acknowledge that when it comes to the question of how many days should it be legal to set off fireworks in unincorporated Clark County, I crossed a line. Or at least let my daughter cross the line for me, and that’s why, even when Erik Hidle takes the day off, I won’t be writing about one of the upcoming advisory votes even though I’m typically the backup county government reporter.

Commissioner Steve Stuart proposed the advisory vote on fireworks. While he receives emails every year from people frustrated with fireworks, he said he was particularly touched to receive this letter and even showed it to Commissioners David Madore and Tom Mielke. Should I have let my daughter write a letter to Big Stu? Probably not. But while our 4-year-old slept right through the nightly explosions, Amelia, 7, couldn’t sleep. After the fourth consecutive night of her being up past 11 p.m., and with my husband and I unable to give her a good reason why it’s OK for people to set off fireworks for so many nights before the holiday, I told her that three county bosses get to set the law about fireworks. I told her maybe she should go tell them how she feels at one of their meetings, and my shy little girl pulled her sheet over her head. (When I told this story to Erik, he said he often does the same thing on mornings he has to go to commissioner meetings.) Then I suggested she could write one of the bosses a letter. I did spell “Commissioner Stuart” for her, but she did the rest.

And Big Stu did say the other day he put a response in the mail to Amelia, complete with a copy of the resolution.