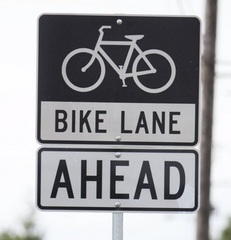 This morning, conservative talk show host Lars Larson emailed Vancouver Mayor (and civil engineer) Tim Leavitt, as he’s done before when he notices something in the city he doesn’t like. This time it was about the re-striping of MacArthur Boulevard.

Which idiot decided to stripe McArthur down from two traffic lanes to one?

Thank you for contacting me about this matter.

By the disrespectful tone of your email, I must surmise that the re-conditioning and re-striping of MacArthur Blvd has come as a surprise to you.

This matter has been the subject of several city council meetings and at least a couple of media stories, over the past 9+ months.

Further, the re-striping of MacArthur Blvd has been envisioned for years, as part of the comprehensive plan to improve vehicle/pedestrian/bicycle safety throughout Vancouver.

Your Vancouver City Council unanimously agreed with the implementation of these improvements, and after detailed traffic and safety analysis was performed on MacArthur Blvd.

Might I suggest that this issue would be a good opportunity for you to engage councilor Bill Turlay (a non-engineer), for his perspective on why he supported the re-conditioning and re-striping project.

Now, Leavitt didn’t take the time to link to stories we’ve written about plans for MacArthur Boulevard, but it’s true we’ve written several stories since 2011 about plans for the street, including when Public Works Director Brian Carlson issued a memo with the recommendation for the new configuration, and again when Carlson gave the presentation to the city council. We also let people know that the city was seeking input on what should be done on MacArthur, and have published Letters to the Editor for and against the project.

Additionally, the city did what it is required to do in terms of notifying nearby residents. Three times over the course of the project, more than 700 postcards were mailed to homeowners and businesses, plus notices in neighborhood newsletters. (Of course, if someone rents a home, the notice goes to the property owner, so it is on the property owner to tell the renter.)