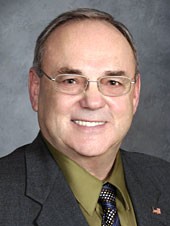 Tuesday’s county commissioners hearing on expanding mining zones in Clark County was a lively one.

And that was before Commissioner Tom Mielke’s apparent exorcism.

Dozens of neighbors came to speak out against the proposal, which calls for opening the door to larger mining operations countywide. Indeed, so many people showed up that the county had to open its overflow room to accommodate all of them.

As the meeting dragged on, it became evident that Commissioner Tom Mielke wasn’t going to be swayed by the testimony. And when he suggested giving an attorney working for some mining operators additional time to provide testimony, the natives became restless, jeering and yelling things at him. Mielke stayed strong and soldiered on. But it was clear that the meeting wasn’t going to end on a happy note.

By the meeting’s close, things had deteriorated; the heckling had gotten louder as Mielke attempted to rationalize his decision-making process. Mid-sentence, a transformation happened.

A guttural grumble bubbled out of his throat — like a demon escaping the confines of its host body — and the meeting came to a sudden end. Probably because the malicious incorporeal spirit, now unleashed, was searching for a new host body. Mielke was trying to protect people.

Below are two videos. The first shows what happened, exactly as it transpired. The second is evidence of Mielke’s out-of-body experience.

We’ll have to wait until Tuesday to see whether Mielke has recovered from his possession. If not, maybe he’ll just start ending every meeting with his own private Call of Cthulhu.