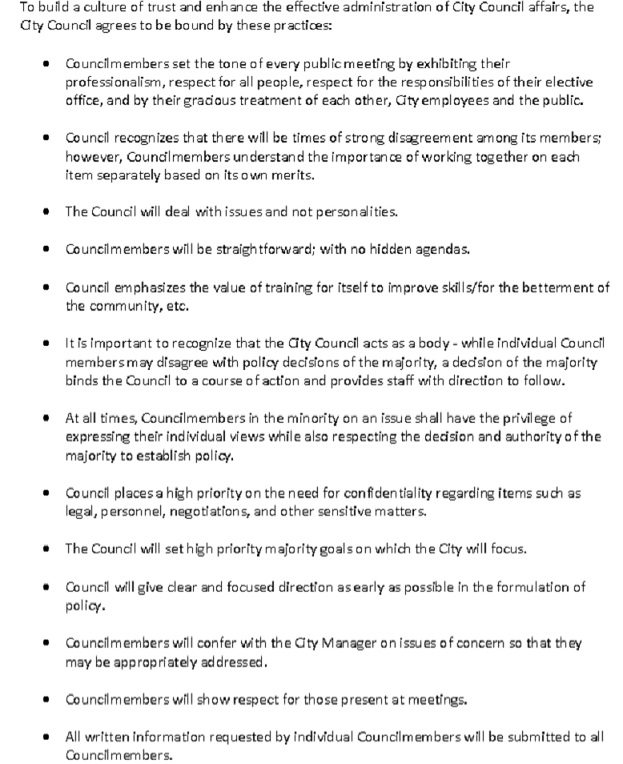 On Monday, the Vancouver City Council outdid themselves: They couldn’t even all agree to adopt a basic set of guidelines on how to behave.

Mayor Tim Leavitt’s idea for a “council compact” was discussed at council retreats this year and last year. As Leavitt outlined in a July 10 memo, the compact “is not intended to be established as a new council policy, but rather a less formal articulation of shared and mutual expectations of members of the Council as they fulfill their leadership as a corporate body.”

Councilors received a final draft on July 1, and it went to a vote Monday. Basic, right? Everyone agrees to not do what Councilor Jeanne Stewart has accused councilors of doing (having hidden agendas) and essentially follow the Golden Rule.

Councilor Larry Smith was unfazed, saying he belongs to other organizations with similar guiding principles. All of the wording wasn’t original, as it was lifted from other jurisdictions. Councilors Jack Burkman, Jeanne Harris and Bart Hansen also liked the compact. (No surprise Hansen was on board. Of course Boy Scout Bart loves pledges.)

Council recognizes that there will be times of strong disagreement among its members; however, Councilmembers understand the importance of working together on each item separately based on its own merits.

So basically, evaluate every issue on its own merits and don’t let personal dislike for a fellow councilor get in the way. Here’s the complete compact: But Councilors Bill Turlay and Stewart weren’t buying what Leavitt was selling. Turlay said it’s meaningless because there’s no enforcement. Policing behavior is the mayor’s job, Turlay said, and if Leavitt sees councilors running afoul of what should just be unwritten guidelines, Leavitt should tell them to stop it.

Stewart worried the compact could be used a tool to silence the minority, and expressed other concerns about what she called a “feel-good document.”

Take this line, for example: “Councilmembers will confer with the City Manager on issues of concern so that they may be appropriately addressed.”

In other words, if you have questions, ask Eric Holmes and he’ll be sure you get the information.

Stewart said she agreed with most of the compact, but wanted an in-depth discussion.

Smith said any group needs guiding principles for reference, and he didn’t want to read too much into it.

“I see it strictly as what it is, and how we communicate to one another,” Smith said.

Leavitt said the idea was discussed at two retreats.

“I’m a little perplexed, frankly, that there’s some anxiety expressed about the Golden Rules, and what the purpose of those would be. For me, it’s about setting an example for the citizens in our community and letting them know that we are re holding ourselves to a high level of accountability and we’re treating each other and those around us with the respect that everybody deserves. And I think that’s a good message to deliver to the people that we serve,” Leavitt said.

Turlay reiterated it’s not necessary to adopt a “useless piece of paper.”

“This is the way I live my life anyway,” Turlay said.

“Then you shouldn’t have a problem adopting it,” Leavitt said.

The final vote to adopt the compact was 5 to 2, with Turlay and Stewart voting no.