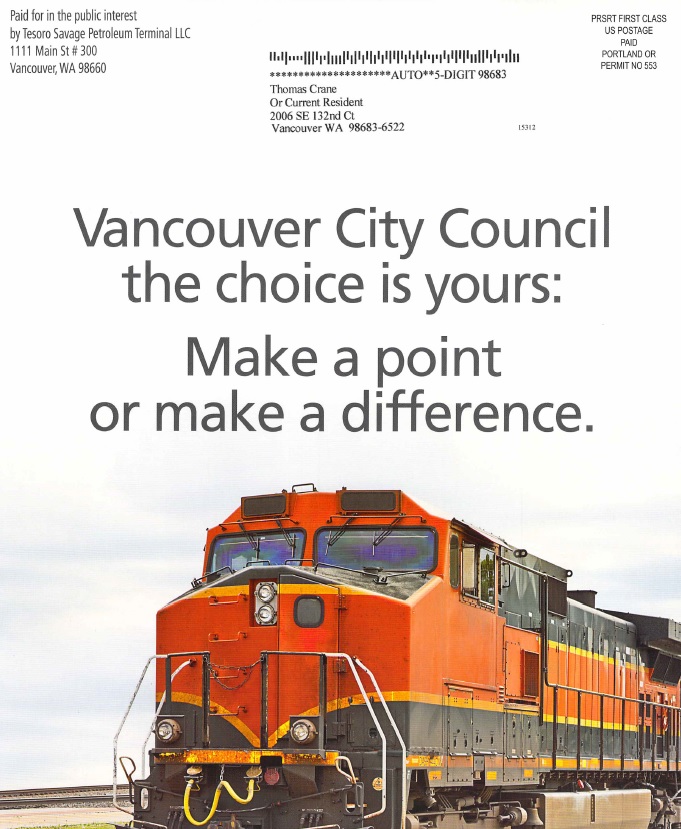 Vancouver City Councilor Jack Burkman has lived in his home for 30 years, so he was surprised to see a mailer addressed to “Thomas Crane or current resident.” He, along with other people who live within city limits, received a mailer from Tesoro Savage Petroleum Terminal LLC, on May 31, two days before the majority of the council voted to oppose the project.

The mailer was referenced several times during the public hearing, and an apparent mailing-list mix-up wasn’t what people found offensive.

Here’s the front and back of the mailer. Note the first class postage – not bulk-rate. Fancy. And now a sample of comments: Cathryn Chudy of Vancouver said she “found this mailer to be deceptive and misleading.” The mailer referenced the city council policy resolution “an empty political gesture. I disagree,” she said. “The only way we can have a voice on the safe handling of crude oil moving through our community is to keep more of it from happening at all, given the unacceptable safety risks.”

Hough resident Den Mark Wichar held up his copy of the “slick card,” and said he hoped residents recognized “that no corporate proposal is all good.” The mailer’s educational and ethical depth matched the thickness of the paper, he said.

“The mailer lectures us that oil trains already travel through Vancouver, as if we didn’t know that. But it fails to add that their proposal would bring many more such trains,” Wichar said.

The most upsetting part of the mailer was the implication “that corporations operate in impermeable bubbles, in which they can do anything they want and people outside the bubbles have nothing they can say. There are no such bubbles. What corporations do affects people and the planet,” Wichar said.

Eric LaBrant, chairman of the Fruit Valley Neighborhood Association, said, “Tesoro sent out a creepy mailer the other day, reminding us that there’s no point in saying ‘no’ or ‘stop’ but if we say ‘yes’ they’ll be real good to us. It’s like a bad high school PSA,” he said. “They’re right about one thing. We have no authority. But together, we have a voice.”