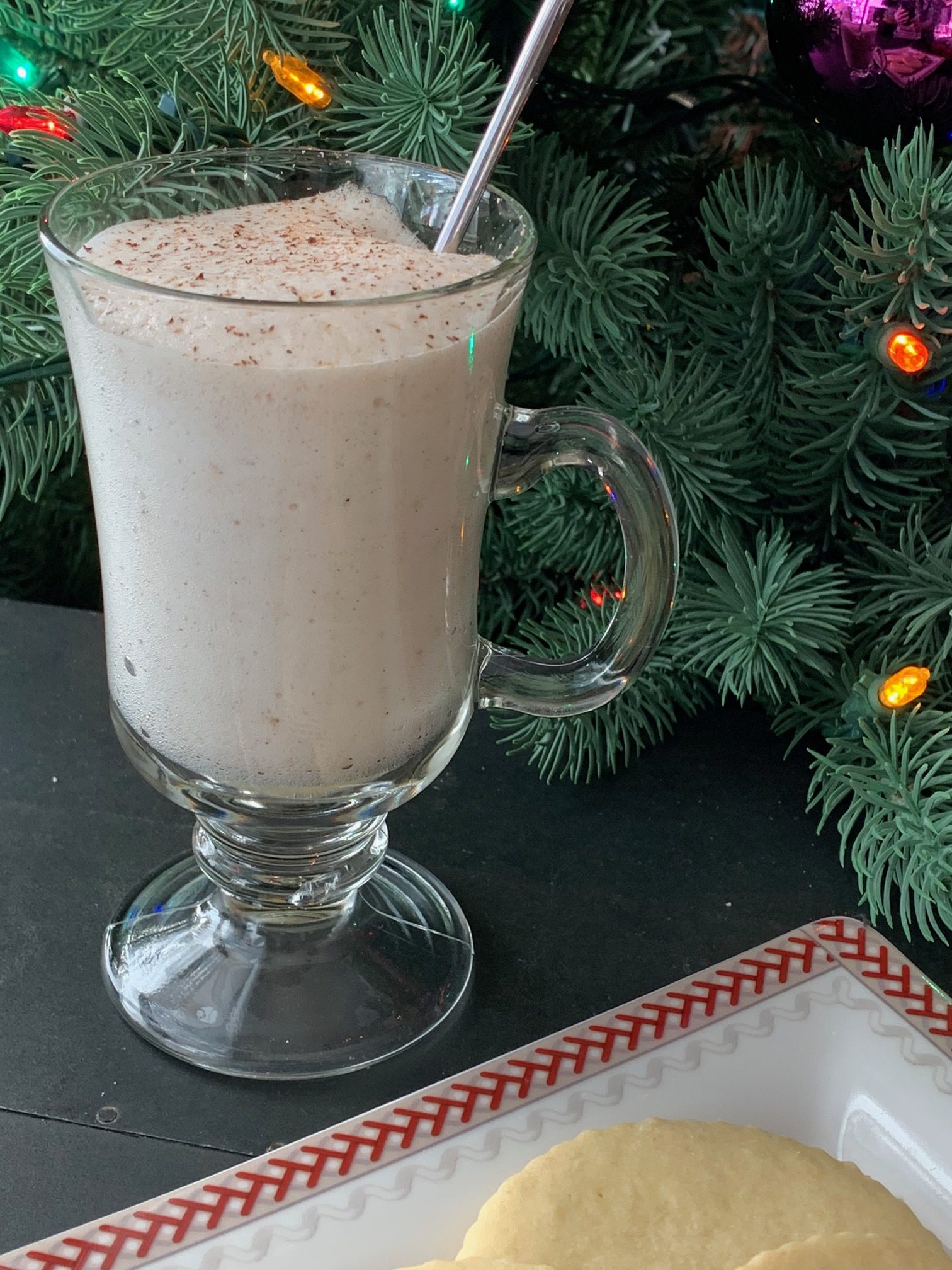 Can you hear those sleigh bells jingling? Christmas is on its way. Having something festive and fun for anyone who’s plant based, has food allergies, or has dietary restrictions is always a nice touch, especially with all the seasonal foods that make it feel like the holidays. If you have not been able to enjoy traditional holiday eggnog, or if you are tonight’s designated driver, this recipe is for you.

I initially started with a recipe that was made with cashews and canned coconut milk, but decided against it because the finished product came out too thick and also seemed too oily due to the high fat content of the coconut milk. This recipe, made with aquafaba, is vegan, gluten, and soy free, and you can use rice or oat milk to make this nut-free also. Most other recipes consist of an alternative milk flavored with vanilla, cinnamon, and nutmeg, which definitely taste a little like eggnog, but are usually thin and lack the body and thickness of the real thing. Since this gets its thickness from the aquafaba and doesn’t contain any eggs, there are no worries of salmonella, so you can taste and adjust this to your liking, which I love.

You can buy commercial soy or almond nog, which are both dairy free, but also contain about 12-15 grams of sugar, which is not too merry if you are diabetic. I used about 2 1/2 tablespoons of Swerve when I made this, and if you are using a granulated sweetener you can add it as directed in the recipe. You can also use honey, maple syrup or agave, but if you are using a liquid sweetener, mix it with the milk and add it at the end so that it doesn’t deflate the meringue. I also added a dash of ground cloves and cardamom to give this just a bit more seasonal flavor. Finish your drinks with freshly grated nutmeg – especially nice! You can use a hand mixer if you like, but the stand mixer delivered better results on the meringue and will also leave you hands free for the 10 or so minutes it takes to make this recipe.

Make this eggnog fresh or shortly before you plan to serve it, as it will start to deflate after about an hour or two. Thick and delicious, it’s great in coffee, too, and makes excellent eggnog lattes. Easy to make and much less expensive than vegan store bought varieties. whipped aquafaba also makes a fluffy and delicious substitute for whipped cream.

Give this eggnog a try. Thick, rich, and creamy, spiked with rum, or not, it’s time to get merry.

Add aquafaba and cream of tartar to the bowl of a stand mixer and beat on high speed for 6 minutes, or until very fluffy. Add vanilla and whip another minute. Add sweetener of choice and whip again, another minute or two, until meringue becomes stiff. Taste and adjust, adding more sweetener if necessary, then add nutmeg, cinnamon, cloves, and cardamom and whip 30 seconds more. Turn mixer to lowest speed, then add milk of choice and mix for about 10 seconds to incorporate. Spoon into glasses and sprinkle with additional nutmeg.

– adapted from Spoon Up Eggless Eggnog, The Hidden Veggies blog