The Internet is for cats 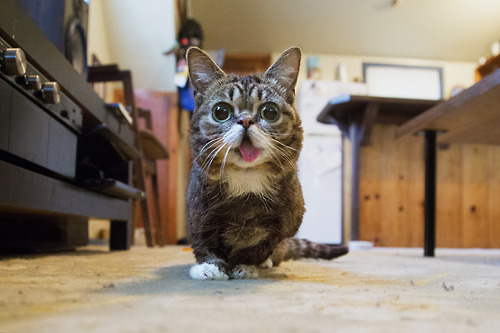 The Internet is for cats.

Everyone knows this of course. We have something like 90 percent of the sum total of knowledge of the human race at our finger tips — on our phones, even — and we spend a bazillion hours (this is a totally scientific number that I got from a completely credible source) looking at funny pictures of cats.

And who can blame us?

I feel like at this point I should burst into some sort of clever Broadway-esque, “Late Show”-worthy song about the cats of the Internet. But seriously, no one wants to hear me sing. So I’ll just share a few favorite Internet cats and call it a day. Kitten Tardar Sauce (a.k.a Tard) has all the best memes.

Grumpy Cat is a clear favorite in my family. As my niece put it at Christmas, “It’s hard to imagine an Internet without Grump Cat.” I agree. And so did a lot of other people as Grumpy Cat won best meme at the 17th annual Webbys. Tardar Sauce looks a bit like a ragdoll but her owners say it’s more likely that she has some form of feline dwarfism as her parents were just your average American shelter cats. The LOLcat, part of the Cheezeburger network of sites ideal for wasting time on the Internet, is more of a species rather than one awesome Internet cat. But the collective LOLcats have created a language that I’ve heard from teacher friends has popped up in high school papers. As an English major, that terrifies me. But I have referred to Lily as Goggie a few times. And my husband frequently tells me the cat is monorailing at him. So new language has to come from somewhere, why not from cats? Better than politicians creating new words. Lil Bub is a new Internet cat in my world. She has a passel of issues related to being a runt, including having a jaw that is under developed, which is why her tongue always hangs out. But she has a Tumblr, a Facebook page, a Twitter account, a book, a host of YouTube videos and was in a movie. So very little stops this ambitious little girl — or maybe that’s her owner. Either way, CUTE! In all seriousness, one of the things that always draws me back to Lil Bub is that she and her owner saved each other. And that is the best part of having a pet — cat, dog, goat, whatever — famous or not. Lil Bub’s birthday is Friday and she’s asking that people do something to help shelter animals in her honor.

And then of course there’s this lady, who I could actually relate to a little, even if she is fake. Because I want cats to be on a rainbow, too.