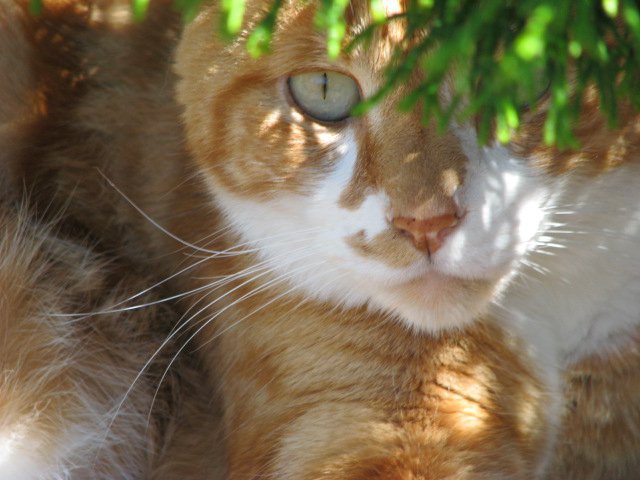 Julius is crazy about hair and sometimes I’m OK with obliging.

I’ve owned cats most of my life. And, in general, it feels like there are fewer decisions about how you’re going to “raise” a cat than come up with a dog. (I’m not sure that there really are — but it seems like it.) One of those that I’ve gone back and forth on is the self-feeder.

And this is the thing I seem to realize over and over with leaving food down. If you have one pet that has the right temperament, it works. If you have more than one, it seems to always be the best option for one and the worst for the other.

My parents have two cats: Julius and Katie. Julius is a giant orange tabby who seems unable to eat more than three bites at a time. Katie is a dilute tabby who seems determined to give new meaning to the word fat. They are both really sweet animals. Julius us crazy — he’s obsessed with hair — but a good cat. Katie is funny and shy and perfectly happy to eat all of Julius’ food. In theory my parents feed them twice a day and pick the food up but I’m not sure it always works out that way in practice. I think this photo is old enough that Katie could still stand with her front paws together.

I’ve tried a self-feeder a few times. Giles ended up really fat when I used it the first winter I had him. I adopted him in 2004, the year after the Northwest was hit by one storm after another, and my new coworkers kept telling me about getting stuck at the paper and staying at the Red Lion at the Quay overnight. If that happened again, I didn’t want him to go without food. So, every morning, I’d load the self-feeder up with enough food to last him at least two days. Good theory, I guess. In reality, a cat that was on his own for at least a few weeks without regular meals didn’t have much willpower. So my slim little grey cat ballooned to almost 12 pounds; he was a little more than 8 pounds when I adopted him.

I took him off the self feeder, switched to light food and added in canned food, and he slimmed back down to about 10 pounds. When he was much older, I could leave a few days of dry food out for him and he didn’t gorge himself. But that was many years later.

Once we added a dog to the household, leaving food out was not an option. Out little corgi mix, Lily, will wolf down anything that she can sniff out. And she loves cat food. The first thing she does when she goes to my parents’ house is head for the cat food dishes to see if anything has been left behind. So new cat Rory and Lily are both fed twice a day. We’ve had Rory for nine months and he was a street cat so I don’t think I’d try him on a self feeder at this point, even if we didn’t have Lily. I’ve also watched Rory eat and I’m pretty sure he wouldn’t stop until every bite of food was gone. Suddenly our slim little grey and white cat would balloon into one of those felines you see on the local news that break fat cat weight records and can barely be held by one poor vet tech.

In order to spare that poor vet tech, I think we’ll stick to the feeding schedule. One reminder though: Make sure you always read the serving size on the packaging carefully. It’s easy to guess your pet’s weight wrong and either under or over feed them.

Not that I’ve ever done that.