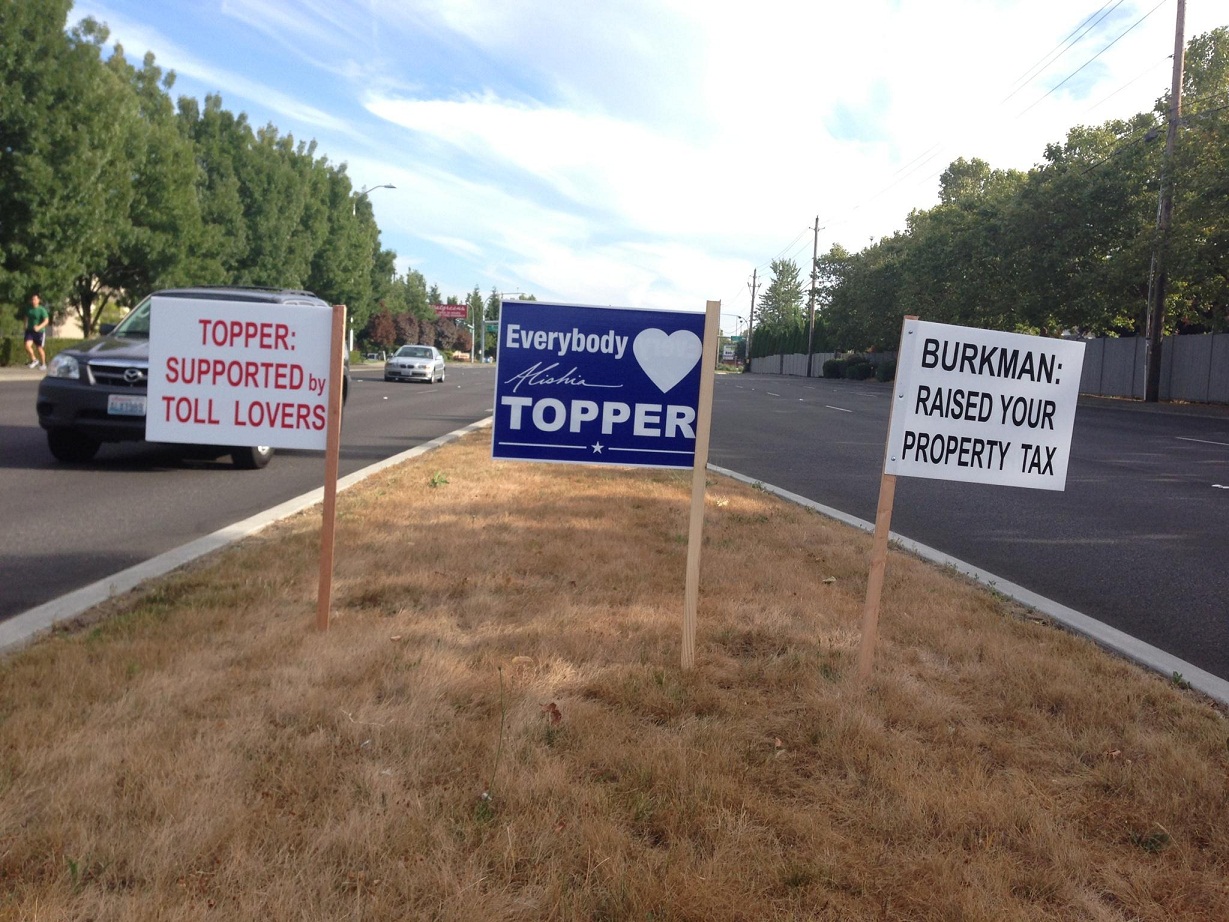 Well, it wouldn’t be a proper campaign season without sign drama, but two types of signs reek of desperation.

Councilor Jack Burkman posted this photo on Facebook over the weekend: Yes, “Burkman: Raised Your Property Tax.” Do you know who else voted for the 1 percent increase? Every other single member of the Vancouver City Council. Yes, even fiscal conservative Bill Turlay and the councilor who David Madore, speaking to former maven Andrea Damewood, once referred to as a “princess,” Jeanne Stewart. When the council voted in November to adopt a 2013-14 biennial budget that included a 1 percent property tax levy increase and utility rate increase, Turlay said that as a councilor he has a new perspective on the reality of the budget.

“I want to tell you that on this side of the table, it looks different,” Turlay said. While the city has cut its budget and does seek efficiencies, the 1 percent increase doesn’t even cover the cost of inflation.
“We need money to provide police and fire,” he said.

He added this budget session was rough, but the budget will be in worse shape in coming years because of the structural deficit, and that’s why he supported the increase.

“I’m dead set against it, but I’ve got no other choice,” he said.

Princess Stewart said during the November meeting that the city will continue prioritizing and streamlining services.

Councilors have an obligation to provide those services, even though they don’t like raising taxes, she said.
“We pay taxes, too,” she said.

So back to the Burkman sign – yes, he voted to raise taxes. But in the interest of accuracy, why not put out a sign saying all councilors in the Aug. 6 primary — Burkman, Jeanne Harris and Stewart — raised taxes?

As for the “Topper: Supported by Toll Lovers” sign, well she’s running against Stewart and Ty Stober, and Stober wouldn’t make an issue of her supporting the failed Columbia River Crossing. My question is, Who is a “toll lover”? Topper does have lots of supporters who also endorsed the CRC and thought tolling was the best way to help pay for it, but I don’t recall anyone saying they “love” tolls. Tolerate and accept them, yes. Love? No.

But the Topper crew has struck back: