Turlay: “There is no damage to humans on the stuff that’s coming out of Wyoming” 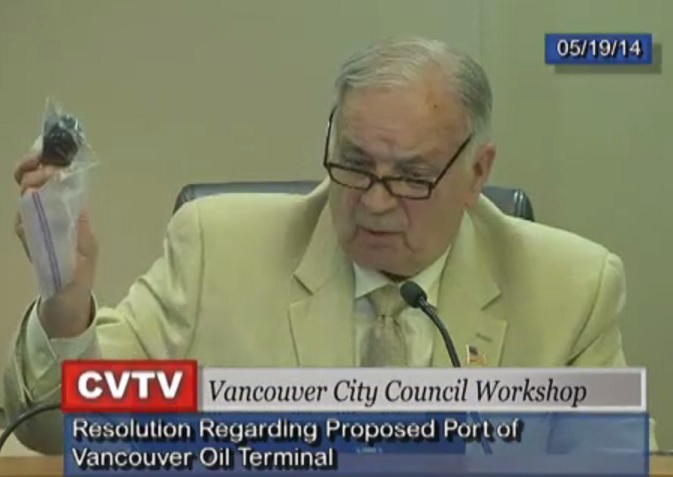 Vancouver City Councilor Bill Turlay has made it well-known he doesn’t believe in climate change. It came as no surprise he spoke up Monday to question whether having the Northwest’s largest oil-handling facility would really create an environmental threat and lecture the audience that “we have to have energy.”

I was surprised, though, that he brought a lump of coal. The video is posted below. But here’s a transcription of what Turlay told the audience Monday, nearly all of whom oppose the oil terminal. If the people in the council chambers were (quietly) snickering, I can only imagine what was being said downstairs, where the overflow crowd was watching a live feed.

“One of the things that I’d like to present is the fact that all of us are concerned about safety. And, I am, and I share a lot of the feelings that many of our listeners and our watchers and those who are here tonight. I would like to point out to you, though, that there are studies that have to do with energy use and prosperity. I see the shirts that say ‘beyond oil’ and ‘beyond coal.’ I would venture to say that we’re not there yet. And if in fact we’re going to curtail the use of coal and oil, that your standard of living is going to go down. Our national debt is going to increase because we’re not going to have prosperity without using efficient energy,” he said.

“I’d like to just take a few minutes here and explain where I’ve been last week. I went to a place called Gillette, Wyoming. And here’s a little piece of the black stuff that they dig out of the ground. And they have found a coal plant that I went through, it’s Dry Fork Station, you can almost eat off the floor in the area where the main turbine is turning and it’s generating, on a relatively small footprint there, they’re generating over, they can generate, over 500 megawatts of power out of there. And then I also looked at some of the propriety information which has to do with their emissions. And they all are below the EPA standards. So I would venture to say that perhaps instead of spending $200 billion dollars in the last 20 years on climate change, that we invest some money in burning coal even cleaner. There is no damage to humans on the stuff that’s coming out of Wyoming there. We have to be, we have to be energy efficient. We have to also increase our energy output,” he said.

“China is growing at about almost five times of our economy,” he continued. “We’re going to be irrelevant in not to distant future unless we can have a base-load energy source. And wind and solar are not base-load. They do not provide 24, 365 power that is of a high quality. In other words, the voltage doesn’t fluctuate. It’s essential that we have that to be competitive in the world market. There are, because of the natural gas that we’ve gotten and the shale gas that we’re bringing up now, our energy prices in many parts of the country have dropped. Companies are looking to move here from Europe. That increases our prosperity, it increases jobs. Those of us who are quote ‘mature citizens’ are going to see a cut in our benefits after a period of time. What happens if the dollar falls because international trade does not trust the dollar anymore? Seventeen trillion, within the next three years you’re going to be looking at $20 trillion-dollar deficit. We’re going to have debts that are going to continue to, I’m sorry, the debt is going to be $20 trillion, and the deficit is going to be still probably $1.5 trillion a year. We’re printing money at the rate of $65 billion dollars a month now on QE, quantitative easing* 3. And all that is is printing money. It is not creating any wealth. So your dollars are going to be stretched really thin and we’re looking at hyperinflation. I’m worried not only about our safety here, but I’m worried about our economic future. As you all should. And somewhere there has to be some way in here that we can produce energy quickly, efficiently and ecologically safe. And so it’s things like this that we can work on that is a solution that is not that too far in the distance compared to trying to make wind and solar work, and they’re not going to work as base-load energies. Energy is very important for our economy,” he said.

“But I’m not belittling our effort here in trying to cut the coal, uh, cut the oil going through here that may be a hazard to our city and to our citizens. That is also a prime consideration,” Turlay went on. “But I want you to understand that we have to have energy. And if you can come up with something other than this (holding up bag of coal) or the natural gas, then I’d be interested in hearing what it is. Thank you.”

“OK, let’s get back and focus on the resolution,” Smith said.

*It sounded as though he said “quality of the easement,” but I couldn’t tell. He was referring to quantitative easing. I think.