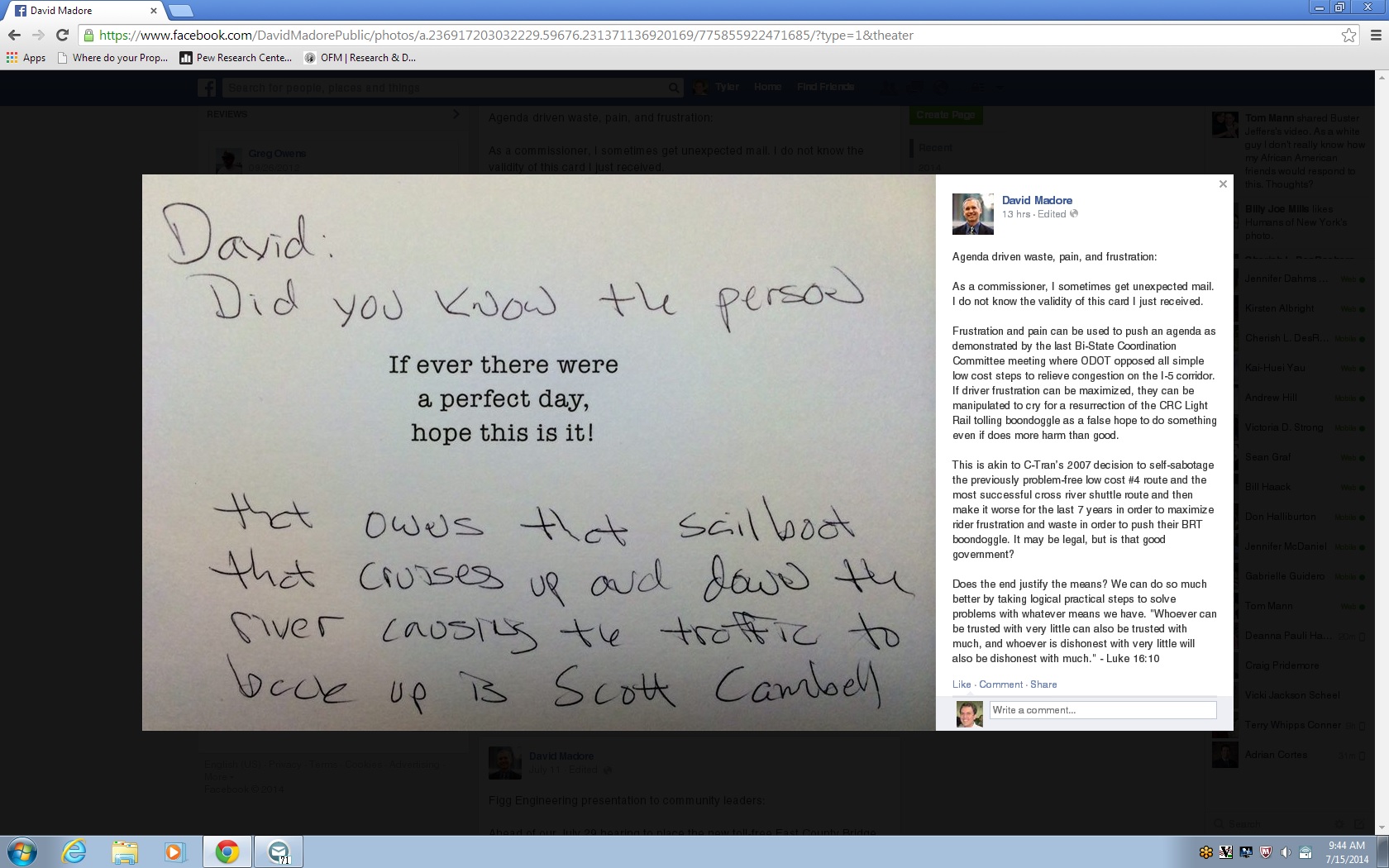 Commissioner David Madore is living by Mark Twain’s old adage that one shouldn’t let the truth get in the way of a good story. In a Facebook post Monday, Madore spreads a baffling rumor about Scott Campbell, publisher of The Columbian.

You see, the commissioner received an anonymous note the other day. It said that the boat owner who’s causing all of the bridge lifts on the Interstate 5 bridge was Campbell. Now, instead of thinking, “Hmmmm, this sure is unsubstantiated. Logic would dictate that a business owner would have better things to do with his time than take his boat out for a joyride during the middle of the day for the express purpose of causing a bridge lift,” Madore decided to use the letter as the basis for a blog post. Perhaps I’m biased on the matter. After all, Campbell’s name appears at the bottom of all my paychecks. But this does not appear to be a responsible or ethical use of a political platform. Madore expounds on the letter, musing, “If driver frustration can be maximized, they can be manipulated to cry for a resurrection of the CRC Light Rail tolling boondoggle as false hope to do something even if it does more harm than good.”

He ends the post with a passage from Luke 16:10: “Whoever can be trusted with very little can also be trusted with much, and whoever is dishonest with very little will also be dishonest with much.” While that verges on tautological thinking, there is a smattering of truth to it, even if it’s kind of irrelevant to the discussion. I mean, if we’re cherry picking Bible passages, doesn’t it also say “You shall not spread a false report”?

I asked Campbell about his boat, and he was all too happy to share.

He said his boat causes at most two bridge lifts a year. These typically occur during the springtime, when runoff causes the river to rise and, hence, elevates his sail’s mast. It’s not uncommon for sail boats to cause bridge lifts, especially during times of high water. His vessel, which looks similar to others cruising the Columbia, is not alone in causing lifts. He’s certainly not causing any right now because his vessel is currently moored near Seattle.

The Columbian has also received tips about “problem vessels” that regularly cause lifts. So we looked into whether the rumors were true. We have a public record from the Oregon Department of Transportation that lists the names of everyone who has called in a lift during a particularly bad period of time. There are no repeating names on the list. But, hey, as Polly Hicks writes in Madore’s comments, “Hmmm…. if true, isn’t that interesting?” Indeed, but the operable word is “if.”