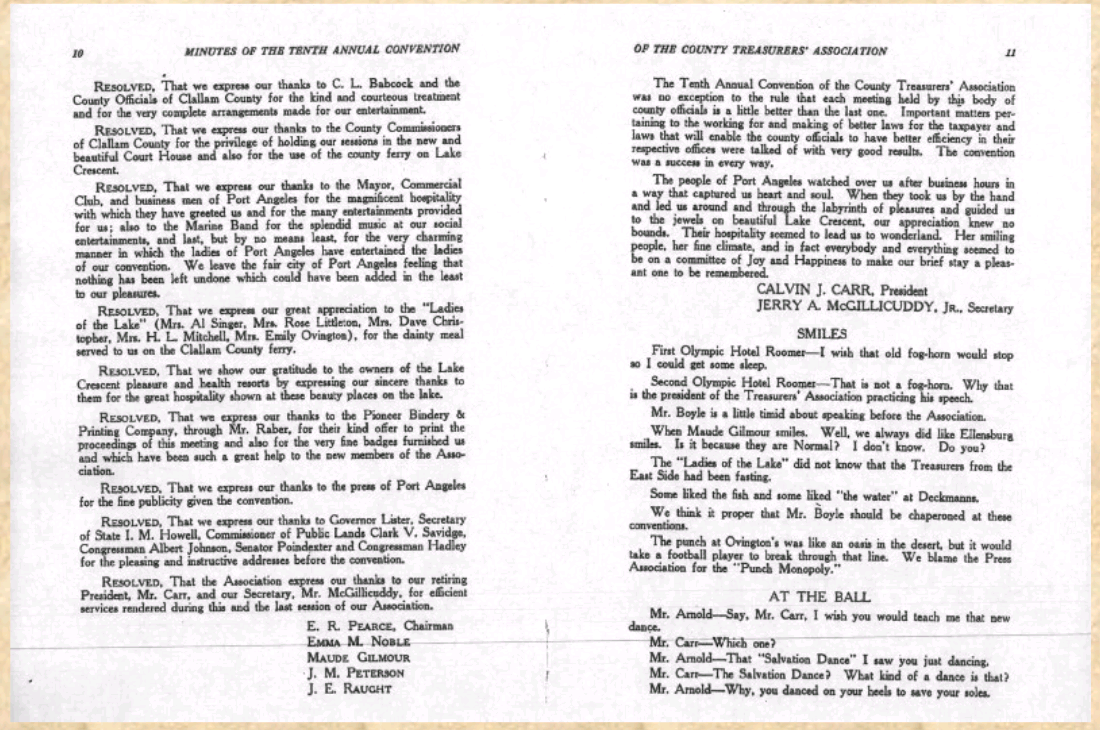 Did you know the written history of Clark County treasurers is incredible? Well, it is and you should take a look at it.

Current Clark County Treasurer Doug Lasher called me today to say he liked my last post on the topic. That adds him to an exclusive list of elected officials who have actually told me they liked something I wrote about them on here. The other three are Republicans. (Don’t worry guys, I know y’all got elections to run so I won’t out you as friends of the blog.)

I mention this because Lasher was all excited that the written history has expanded.

Written on page 26 under “SMILES” is an account from a 1915 gathering of county treasurers in Port Angeles, Wash.

I’ve transcribed it below for easy reading:


When Maude Gilmour smiles. Well, we always did like Ellensburg smiles. Is it because they are Normal? I don’t know. Do you?

The “Ladies of the Lake” did not know that the Treasurers from the East Side had been fasting.

Some liked the fish and some liked “the water” at Deckmanns.

We think it proper that Mr. Boyle should be chaperoned at these conventions.

The punch at Ovington’s was like an oasis in the desert, but it would take a football player to break through the line. We blame the Press Association for the “Punch Monopoly.”

“What does any of this mean,” I asked Lasher.

“I don’t know,” he said. “But you see that last part? It seems elected officials were always finding ways to dig at the press.”

Lasher said this document has become something of a hobby of his. He’s digging through microfilm at the library to pull up more info from the past. And he says he wants to keep updating it for years to come. His hope is the document will continue to be updated “going on for 1,000 years.”

“We’re trying to show people how things change,” Lasher said. “Some people think taxes are this new thing and, well, they aren’t.”