The will of the voters, not necessarily the people 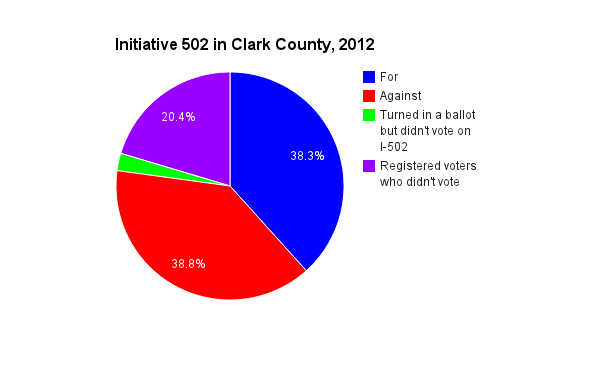 During Monday’s public hearing on a recreational marijuana ordinance, when the phrase “the will of the voters” was used approximately 420 times, Vancouver Mayor Tim Leavitt had to state the obvious: Yes, voters are the voters who actually vote.

He said it in response to a man who was appalled the city council was going to regulate recreational marijuana. The man kept referring to “the state” legalizing marijuana to raise money, and Leavitt pointed out it was voters, not the state, who approved Initiative 502.

“You’re asking us to say a majority vote in inconsequential,” Leavitt said.

“I understand that the vote went the way it went, but I don’t believe it was the majority of the people’s feelings,” the man replied.

“Yeah, believe me, I wish that 100 percent of people registered to vote voted, then you’d have a real indicator,” Leavitt said. “We’ve never had an election like that.”

No kidding. So, because I just learned how to create charts, I thought I’d illustrate the I-502 vote in Clark County. While the measure passed statewide, 55.7 percent to 44.3 percent — the Secretary of State’s office has this nice county-by-county results map — it failed in Clark County by a slim margin.

While we’re on the subject of voter turnout, here’s a chart showing the results of the 2013 mayoral election between Leavitt and Councilor Bill Turlay. I included the number of write-in votes, the number of people who didn’t fill out their ballots completely or correctly and the biggest slice of all — registered voters who didn’t bother to vote.