Sheriff Lucas cleans up for company 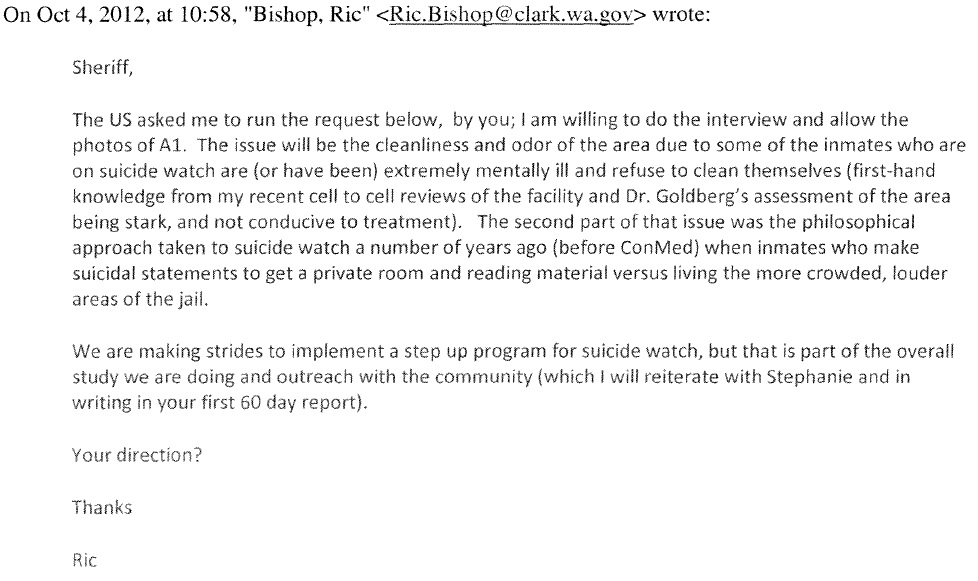 Lucas, who does not allow media interviews with inmates, will let reporters into the Clark County Jail for certain stories. Most recently, he said I could go in last year for a story about an increase in suicides and suicide attempts.

And inmates can call reporters collect, so during my decade on the courts beat I received several calls from inmates complaining about the miserable conditions. But the few times I’ve been in jail (all on assignment, I swear!), I haven’t observed anything shocking. Just to be clear, I am aware I get an edited tour.

This was reinforced recently after the family of an inmate whose death was ruled a homicide filed a lawsuit in federal court.

One of the family’s attorneys passed along three emails he’d received in response to a public disclosure request. One email was from me to Commander Ric Bishop, asking if myself and a photographer could see the single cells where inmates are kept while on suicide watch.

To the left is Bishop’s email to Lucas (click on it to enlarge):

Also, they are Lucas’ guests so he can call them whatever he likes, but I was surprised to see him use the word “prisoners.”

The Columbian only uses “prisoners” to describe people who are in a  prison, which are state or federal facilities. We use “inmates” to describe residents of a local jail.

Enough talk about words. I’ll leave you with a glimpse of what I saw on my tour last year.