No “Bingo!” at State of the City speech 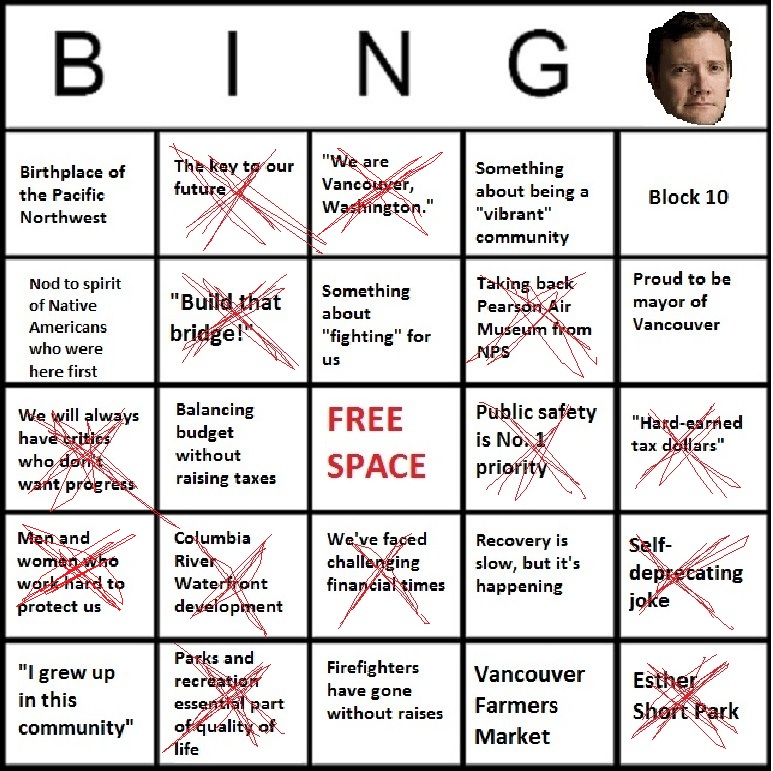 Vancouver Mayor Tim Leavitt gave the annual State of the City speech today, and for the news report, click here.

With that out of the way, how did I do in bingo? The mayor definitely threw me at first, starting with a poem by poet laureate Christopher Luna. I did not picture the mayor as a poetry guy, unless you count limericks. So no bingo, but pretty close. And I was strict. While I don’t believe he uttered the words, “I grew up in Vancouver,” that point was made known in the charity he chose  — people were encouraged to eat at Beaches Restaurant today, and owner Mark Matthias pledged 50 percent of the profits to Evergreen Park Summer Program, which Leavitt attended as a child. He talked about Vancouver being incorporated along the Columbia River before Washington became a state, but he didn’t say “birthplace of the Pacific Northwest.” I don’t believe he mentioned Block 10, even though he talked about downtown redevelopment. (I did have a copy of his speech, but I noted he didn’t follow it word for word.)

He did make a self deprecating joke about how his time as mayor has aged him, though, so at least I got that right. I should have made “not-subtle jabs at David Madore and Jaime Herrera Beutler” as two of the spaces.

According to the copy of the speech I have, he used the following words to describe Vancouver: changing, safe and secure, a great place to live, strong schools, possessing a tremendous wealth of diversity in culture, arts, entertainment and history, spirited, hard-working, resilient … but, alas, not “vibrant.”

Oh well. Maybe I’ll do better with my NCAA bracket.