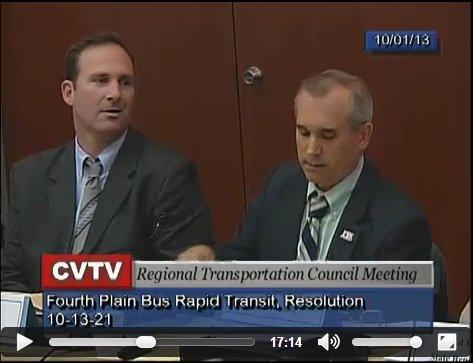 While talking this past week on how to get public commenters to stop talking all mean about people, the Clark County triumvirate of David Madore, Tom Mielke and Steve Stuart also discussed how they should potentially go about not being jerks to one another.

Well, Mielke talked about it.

“When we have our conversations between each of us, I don’t turn to you and say ‘you did this, or you should have done that’,” Mielke said. “I think we need to stay on the issue. Say, ‘Mr. Chair I know you disagree with me on this issue’ but for me to ask you why you voted that way, that’s not in line, I don’t think.”

Likely, Mielke is referring to Madore pointedly questioning Stuart (who is Mr. Chair) on how he voted on an issue during an October board time meeting.

Madore is now asking why Stuart voted yes at C-Tran. Here we go…

Mielke said he still has a good relationship with Stuart, and any issues on such things are between them and don't need public talk.

Mielke then said: “We also heard more-so at C-Tran and they said ‘you’re doing that just because of politics’.”

He didn’t go into specifics, but it sounds like he might be talking about the meeting this week where Stuart told Madore he was changing his vote because, “it has become clear to me that this is a political game and not about policy and the vote that was taken.”

Mielke spoke in very broad terms, so maybe this is way off, but it sure seems like he’s continuing to make an effort at being the peacemaker on the board.

And then, for at least one day, they were.

Look at this! We're all getting along! pic.twitter.com/3Zup4tzcsw

I’ve written hopefully about them turning the corner before. It didn’t take. And I don’t know how good the chances are that it will this time either since there’s still a resolution coming up later this month that calls integrity into question.

But Mielke appears to still believe in them, so maybe there’s still hope.