Madore lambastes Stewart for a vote she didn’t make 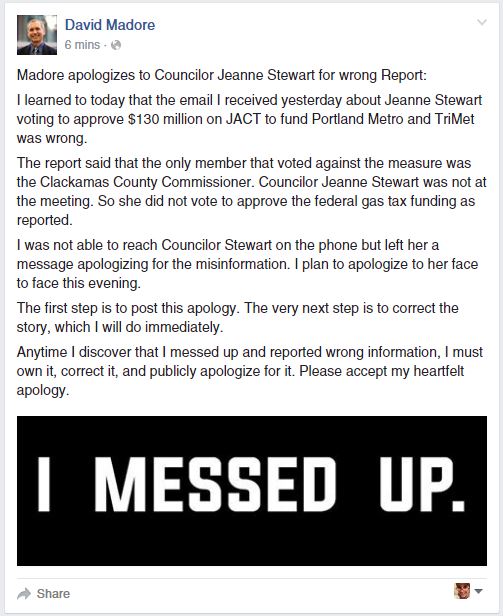 Clark County Council David Madore had to issue an apology to Councilor Jeanne Stewart Tuesday, after he accused her of voting to support light rail in Portland.

The problem? She wasn’t at the meeting where that vote took place.

Stewart, a Republican, is a member of the Joint Policy Advisory Committee on Transportation. The board is comprised of 17 members who are elected officials or representatives of transportation agencies throughout the region.

On Thursday, that organization approved a $130 million spending plan that, among other things, supports transit projects, affordable housing and construction projects including bike lanes and sidewalks. The federal transportation money will come to the greater Portland area starting in 2019, according to a detailed report on Metro’s website.

“Our Clackamas County neighbors are outraged over Thursday’s vote by Clark County Councilor Jeanne Stewart to redirect $130 million in Federal Gas taxes away from roads and toward exorbitantly expensive and citizen rejected transit and non-road projects,” Madore wrote in the original heated Facebook post Monday night.

Madore claimed to have heard about Stewart’s vote after receiving an email from a Clackamas County man. But Stewart was not at that meeting at all, according to Alexandra Elridge, regional engagement and legislative coordinator for JPACT.

Stewart was not happy when I raised the question to her, calling Madore a liar.

After I tweeted about the post, and a couple other people pointed out to Madore that Stewart wasn’t even at that meeting, he made a second post Tuesday evening, apologizing.

“I learned to today that the email I received yesterday about Jeanne Stewart voting to approve $130 million on JACT to fund Portland Metro and TriMet was wrong,” he wrote.

Here, for posterity’s sake, are screen shots of both posts.