Every vote counts — or is at least counted 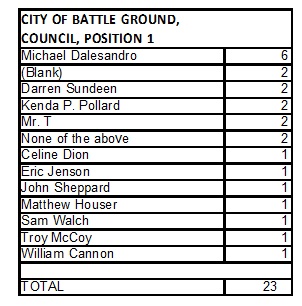 The Clark County Elections Office must record all write-in candidates for President of the United States, but only has to tally the number of write-ins for other races.

In the Vancouver race, Councilor Jack Burkman finished first, but there was only a slight margin between second-place finisher Micheline Doan and third-place finisher Brian Joseph Smith.

Here’s a list of write-ins in the Battle Ground race. Keep in mind Mike Dalesandro is running for a different seat and wasn’t on the primary ballot because he was the only one who filed against Mayor Lisa Walters. Walters announced this week she’s resigning, so even though her name will still be on the November ballot, you would think Dalesandro would be a shoo-in.

That’s good news for the six people so excited to vote for him they put him in the wrong race.

As for the write-ins in the Vancouver race, well, Ciraulo received one vote, the same as “Mickey Mouse” and “My dog.” Nevermind that Ciraulo obviously lives in Battle Ground because that’s where he’s on the council, imagine what Boy Scout Bart would do if he got to serve alongside an actual fireman? His love for firefighters is well-known, but this would be too much.

Someone also wrote “Madore,” which is fine, but … really? Is it really too much to ask that you also write in the person’s first name?

And you are trying to be clever, but the best you can do is “Unknown Comic.”? That’s just sad. As if turnout wasn’t depressing enough.

Here’s the complete list of write-ins for the Vancouver race: