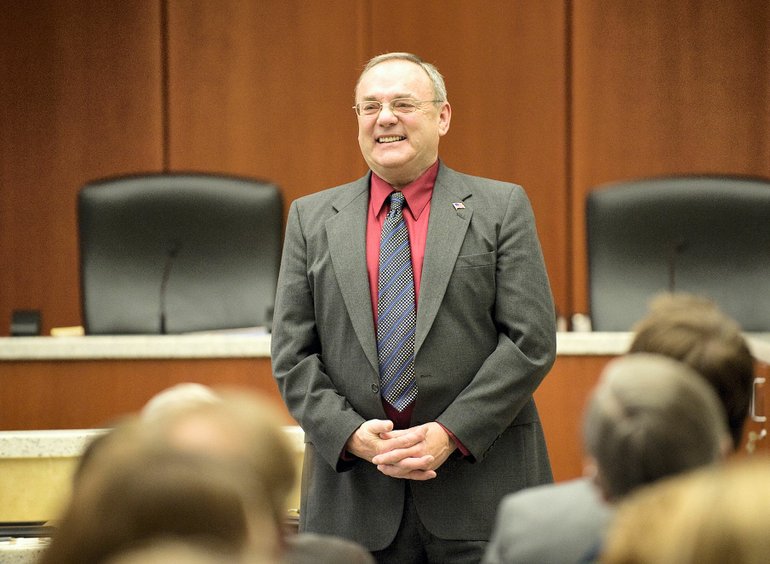 The Board of Clark County Commissioners is at its rawest during “board time,” the weekly Kaffee Klatsch-esque meetings where a triumvirate of men resembling castoffs from a repertory theater production of “Grumpy Old Men” gathers to kvetch.

It’s the place where a millionaire and the two other guys who run the county offer each other backhanded compliments and make passive aggressive digs at each other. It’s their time to set the direction for county business. They do it at a pace slightly slower than global warming (a topic I’m sure has come up during board time because it’s the sort of off-topic conversation piece that fits squarely in the commissioners’ wheelhouse). Lest you think these meetings are all business all the time, they’re not. In fact, they’re seldom business much of the time.

A conversation that could easily take five minutes will devolve into a lengthy aside about the federal government’s intrusion into people’s personal lives. Topics that have been covered ad nauseam at previous meetings are often prolonged, as commissioners ask questions and argue points that have already been answered and argued in the past.

Despite every board time meeting standing out as a veritable child’s treasury of impressive displays of political posturing, some stick with you. Take for example the commissioners’ last meeting on Wednesday, in which the county sages, particularly Commissioner Tom Mielke, were in rare form.

First, the meeting started with a discussion of commissioner salaries. Readers of APIL may remember that just last week Commissioner David Madore proposed reducing the District 3 seat’s salary to $83,000 a year starting in 2015, followed by the District 1 and 2 seats in 2017.

That conversation led into a discussion about what the commissioners receive in the form of a monthly vehicle reimbursement. Right now, it’s $700 a month.

And that’s when it got interesting.

Mielke wanted to increase the amount to $800 a month. But Madore disagreed, saying he’d prefer lowering it to $600 a month. The conversation, edited for brevity, went like this:

Madore: That’s getting up there, Tom. That’s a month.

Mielke: We gave up all our mileage. We used to have mileage and a car allowance. We gave that up …. You see, this is in lieu of having an issued vehicle.

Madore: It is. I will go along with whatever you two commissioners want to do, but I will voice my preference on this. This is per month, and I think you can lease a car for less money than this. I just look at what the city of Vancouver did by giving that raise to its top-level management and what message that sent to everybody else. That was the wrong message. To me, this seems like, man, that’s way up there.

Mielke: The alternative is to have an issued vehicle with a credit card.

Eventually, the commissioners decided to freeze the reimbursement at $700 per month, but Madore continued to lightly protest.

Madore: Well, with your two votes this already happened.

Madore: it is, but I just want to communicate that I have reservations.

Mielke: I hear where you are, but one thing I want to be clear on is we’ve given up a lot, and the true expense, I think it reflects that. By the time I make car payments, buy my insurance and buy my (unintelligible) …

Ed Barnes: I spend that much just heading up to Yacolt Mountain!

But there you have it. Without an extra $700 a month, there’s no way the commissioners could possibly afford their gas, let alone owning a car.

Later in the meeting, County Administrator Mark McCauley mentioned that the commissioners would have to participate in a mandatory training session regarding public records and meetings. Mielke balked at the idea. “How can they (the state) require an elected official do that?”

“How can they?” McCauley said. “By passing a law.”

And that is exactly what the Legislature did this year. Senate Bill 5964 is designed to improve transparency in government and reduce lawsuits by requiring that elected officials take refresher courses on the state’s Open Meetings Act.

Mielke likened the new training to mandatory diversity training he had to take. It sounds like a traumatizing experience. “I knew I was going to flunk that with flying-A colors,” Mielke said.

That begs the question: How do you “fail” a training seminar unless you go into it with the mindset that you disapprove of the topic? One thing is for sure: Despite Mielke saying the county is “ahead of the curve” when it comes to record keeping, the county has been lax about announcing closed-door executive sessions. In May, Nancy Krier, the state’s assistant attorney general for open government, said the commissioners could probably use a refresher on the Open Public Meetings Act.