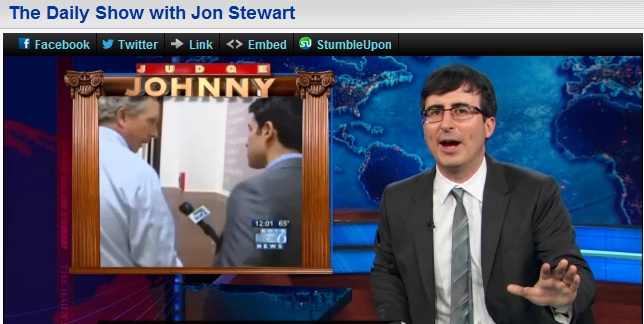 As reporter Paris Achen reported earlier this month, a Vancouver man who pleaded not guilty to illegally discharging a firearm said he was following the advice of Vice President Joe Biden.

Biden, in response to a question in February, said people don’t need semi-automatic weapons to defend themselves at home because firing two blasts in the air from a double-barrel shotgun would scare away a would-be intruder.

The so-called “Biden defense” caught the attention of national media, and it proved irresistible to the writers of Comedy Central’s “The Daily Show.”

Then he moved on to the Biden defense. You can view the clip on The Daily Show’s website.

Judge Johnny, who played a clip of defendant Jeffrey C. Barton as well as a clip from Biden’s February interview, said it was a tough case. On the one hand, people probably shouldn’t go around firing guns in the air. On the other hand, “The vice president literally told me to,” is a pretty good defense.

If there’s any legal precedent set in the case, Judge Johnny said, it should be this: “For God’s sake, ignore Joe Biden.”