This is why we can’t have nice things 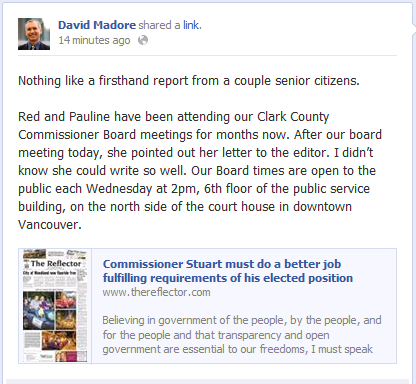 Last month the Clark County commissioners hit a turning point. It appeared the bickering, the snide comments, the filibustering and the yelling had come to an end. It appeared they were just going to do the county’s work free of grandstanding and politicking.

Keyword there being “appeared.”

Because hey, after having three weeks of pretty successful meetings, why wouldn’t Commissioner David Madore post this on Facebook? The letter says Stuart is rude to Madore. You know what, that’s true, and I’ve reported it. Remember the cursing? Ah, good times.

But this letter claims this is some one-sided drama perpetrated only by Stuart. And that’s about as accurate as saying the commissioners meet on the moon because it’s technically in our solar system.

Let’s look back to one of the commissioners’ least effective board time meetings, on Aug. 14. Just three weeks ago. Here we have Madore filibustering the room, Stuart begging him to stop, Madore threatening Stuart and then Stuart taunting him to continue.

Now, being fair to Madore, he only introduced this new tact many months after Stuart continued to prod at him. I suppose it was bound to happen.

But the idea that Stuart is the only one causing problems, or stalling meetings, or acting childish is make-believe. It just isn’t true. Madore and Stuart both have red hands on this one and they’ve been about as subtle as sledgehammers in telegraphing their dislike for one another.

Still, it seemed since that Aug. 14 meeting that progress being made. It really did appear that maybe, just maybe, these guys were going to get along. Or, you know, act like adults.

It’s fitting that school is back in session this week, because I honestly imagine this is how high school works now that the Internet exists.

The funny thing is, this kind of behavior would probably be frowned upon at a high school. But at Clark County? Well, this is just what we should expect.