Behind the scenes of Tuesday’s candidate forum: Scheduling headaches and a non-endorsement 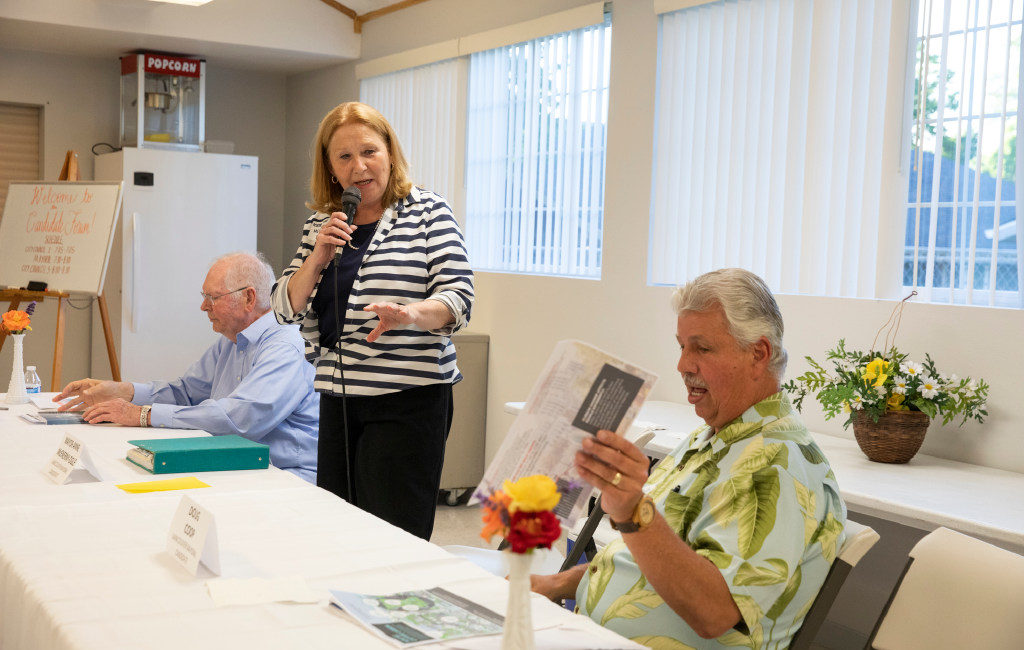 There was no shortage of intensity at Tuesday’s forum for Vancouver mayor and city council candidates, with the eight participants outlining their drastically different priorities and visions for the city. The event was informative, the speeches at turn impassioned, and if you haven’t read my write-up on the newsworthy highlights yet, you can find it here.

But let’s take a minute to address the behind-the-scenes dustups that didn’t fit in the main story.

The first: Apparently, there was a rumor going around ahead of the event that the event’s location — Trinity Baptist Church in central Vancouver — had formally endorsed mayoral candidate Doug Coop.

They hadn’t. The confusion stemmed from a bit of confusing branding on Coop’s social media, in which a link to Trinity Baptist Church appeared below a blurb of campaign text and made it look as though the church had written the endorsement. (It happens — the campaign manager for Carolyn Long, a Democrat who ran for Congress last year, had to issue an apology after a misleading piece of website formatting falsely made it look as though Long had been endorsed by the Longview Daily News).

“It appears that the location for our forum has signed a supportive statement for a candidate,” McEnerny-Ogle wrote. “Candidate forums are usually held in neutral locations.”

Fernald followed up Coop via text, asking if he’d been formally endorsed by the church.

He seemed as surprised as anyone.

“Well if they did then that is awesome!” Coop responded.

Fernald checked with Trinity Baptist, and confirmed that they’d never issued the endorsement. Coop’s campaign ended up removing the confusing post shortly before the gathering.

The forum’s organizers also ran into scheduling conflicts with several of the candidates ahead of Tuesday’s event.

Mike Pond, a candidate running for Vancouver City Council Position 1, had attended the forum as an audience member but didn’t join the other candidates. When I asked him why, Pond said he’d shown up ready to participate but had been told that he’d RSVP’d too late. The event organizers hadn’t allotted enough time to accommodate him.

I asked Fernald — who I imagine could really use a nap right about now — what happened there. She clarified that she’d reached out to Pond four times since June 4, twice by phone and twice by email.

“He never responded to any outreach until this morning,” Fernald said Tuesday evening, in an email after the forum had concluded. She attached email and phone call records confirming her account.

She went on to outline some of the scheduling constraints:

“(City council candidate) Kim Harless is chair of a charter committee, so she had to leave at 7:30. Mayoral candidate Earl Bowerman had another interview with a local TV station on the same night as our forum, and the Mayor and several other candidates were at the 49th District’s Democratic meet and greet at Marshall park before leaving that event early to rush to our forum,” Fernald explained.

“I share that to show how intentional our planning and scheduling had to be. We planned down to the minute.”

Forum organizers also ran into problems getting in touch with all the candidates for City Council Position 2. The two challengers for that race, Kara Tess and Tami Martin, didn’t participate in the forum; Tess didn’t respond to the invitation until around 11 p.m. the night before, and Martin never responded at all, Fernald said.

The incumbent Pos. 2 city councilor, Erik Paulsen, attended the forum but wasn’t allowed to partake because he didn’t have anyone to share the stage with (my original story simply said he didn’t participate. That’s true, but deserves a clarification — Pauslen sent me a follow-up requesting as much).

“I would hate for a reader to have the mistaken impression that my lack of participation was a result of disinterest or lack of engagement on my part,” Paulsen wrote.