Food On the Table

Can Thanksgiving be exciting? 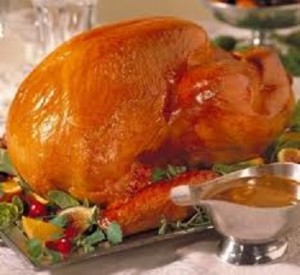 The Thanksgiving food ads started some weeks ago, and in newspaper food sections, magazine articles and the various TV cooking shows, we’re urged to try something different.  Maybe an Asian twist, or an Hispanic taste.  Couldn’t hurt to make an all-vegan meal this year, right?

Hah!  Not likely.  There are two meals that are sacrosanct in our house, in our family, and that’s Thanksgiving and Christmas.  Christmas Day, it’s prime rib, Yorkshire pudding.  There’s a little leeway on the rest of the dishes, but not much. Taters. A nice salad and a couple of veggies (some choice here). Many desserts.

But our Thanksgiving menu is written in stone, outlined in the stars, permanently writ in the laws of our land.  Roast turkey. Gravy.  Herb/sausage dressing.  Mashed potatoes, white and orange.  Cranberry-horseradish sauce.  Regular cranberry sauce. Green beans in creamed mushroom sauce, canned string potatoes on top.  Another veggie to soothe Biscuit’s conscience.  More gravy.  Pumpkin pie.  Coffee.  Did I forget anything?  Oh yeah, good white wine (the wine assignment always goes to the bachelor boys who can’t cook.  Or wouldn’t be allowed to cook, even if they asked).

Oh, it’s not that anyone hasn’t tried to shake things up.  One year a new son-in-law tried to introduce his family’s oyster dressing.  It was yummy, tasty and everyone would have liked it.  On a day other than Thanksgiving, that is.

Biscuit, award-winning cook that she is, always suggests something different, something healthy.  Everyone assents and nods their collective heads.  After all, Biscuit pretty much organizes the whole affair and her pie crusts bring grown men and women to tears.  So she cooks something, and at the table, the roasted broccoli, parsnip soup or gingered-brussels-sprout-surprise is admired by all, tasted little and thrown out a week later, having grown its own unique bacterial culture in the back of the refrigerator.  Goddaughter K, in her vegetarian phase, would bring something root-vegetable based.  Bless her heart,  I don’t know what happened to those concoctions, but they left the house pretty much intact. She’s since come around to the carnivore side (I like to think I did my part).

Biscuit is not only an award-winning chef, but she can cook or prepare just about anything. But oddly enough, she has never cooked a turkey. Not ever. When we were first married, her sainted mother would take care of it: dressing, stuffing, roasting, basting. We’d go over to Boise, then alternate years, she’d come over here. One year, a blizzard blocked the gorge as well as all of eastern Oregon. Ruth stuck the as-yet-uncooked turkey in a carry bag, jumped into the Boise-PDX puddle jumper (try that, post-911), and the next day, we awoke to turkey on Thanksgiving.

After her dear mother died, I took up the roasting chores. After a few too-dry or too-raw starts, I learned about the invention of the cooking thermometer, and had much better results.

It’s not that Thanksgiving can’t have something new.  During the years my brother Chris, and his family lived in the area, we had a turkey cook-off.  He’d destroy a turkey of dubious origin on the barbeque while I’d roast my lovely young tom to perfection, using the convection oven, and then we’d hammer away at our poor dear mother:  “Mine’s best, right?”  “No, nitwit, mine’s best!”  “Maaaa!”  Mothers are peacemakers: she’d always resolve the competition, “Well, they’re both good.”   Of course, with two big turkeys, we always had lots of leftovers, which is another necessary element of the Thanksgiving feast.

And then our wives would compete to see who’d bought the cheapest turkey that year.  Got to admit….Chris’ wife always won that one.

We also “enhanced” our turkeys in some way.  One year I made sure that everyone knew I’d cooked an organic, free-range turkey.  Just before carving, I surreptitiously stuffed toy critters into the body cavity:  bugs, spiders, even a lizard.  One year Chris hid a tape recorder in his:  “Help me, help me….I’m burning up!”.

Another year, I decided to show the miracle of life to our then-young children: the turkey was stuffed with a chicken, which was stuffed with a game hen into which had been inserted an egg (Biscuit nixed the dead starling idea which logically should have come after the game hen and before the egg). After I pulled each bird out, with appropriate biologic commentary, I had my brother break the egg shell, out of which fluttered the message, “You lose!”

OK, it was funnier at the time and it’s possible cold adult beverages made it more so. By the way, the chicken and the game hen, which looked terrific in the magazine article from which I’d stolen the scheme, looked terrible in practice:  the skins were as pasty-white as if they’d never been cooked. It didn’t occur to me that they wouldn’t roast to a lovely brown when jammed into the body cavity of the next up-sized bird. Probably a good thing the starling idea was nixed.

Much of family having grown and moved away, for the last ten years or so, we celebrate with our other family:  Biscuit’s college roommate and whoever’s grown children happen to be in town. You’d think bringing new blood into the Thanksgiving equation would shake up the menu somewhat, but no. (See the rules above.)