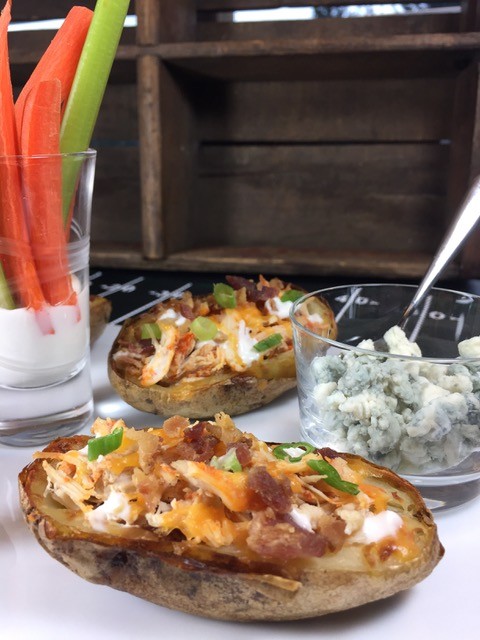 Two popular game day snacks team up to make one winning combo for your Super Bowl lineup.  Buffalo Chicken Potato Skins are the best of both worlds, and much lighter than traditional buffalo wings and potato skins.  Using light sour cream and reduced fat shredded cheese makes them a wee bit healthier.  You can prep and stuff the potatoes ahead of time with the chicken, cheese, and bacon and store them lightly covered in your fridge.  Uncover and rewarm in 400º F oven until cheese melts and potatoes are heated through, then finish with sour cream and green onion garnish.  Best served warm, team up with blue cheese or ranch dressing for drizzling or dipping.

Make the chicken in your slow cooker by combining two or three large chicken breasts with 1/2 cup of hot sauce and 2 tablespoons of melted butter.   Cook on low for 4-6 hours, or until your chicken is fully cooked, then shred with 2 forks.  This will give you extra chicken that can be used for more potatoes, or for nachos, tacos or other game day fare.  If you are short on time, give yourself a break and use rotisserie chicken. Sour cream thinned with a little water and transferred to a squeeze bottle makes for neat, easier garnishing.

Eagles versus Patriots – game on!

Preheat oven to 425º F.  Scrub potatoes well and prick each potato a few times with a fork.  Place potatoes on a foil lined baking sheet and transfer to oven.  Bake for 50 minutes, or until tender, then remove from oven and let cool.

Raise oven temp to 450º F.  Cut each potato in half and scoop out the middle, leaving 1/8 inch of potato inside the skin.  Reserve scooped potato for another use.  Brush potato skins lightly with oil, both inside and out, and return to oven.  Bake until lightly brown and crisp, 10 minutes on each side.