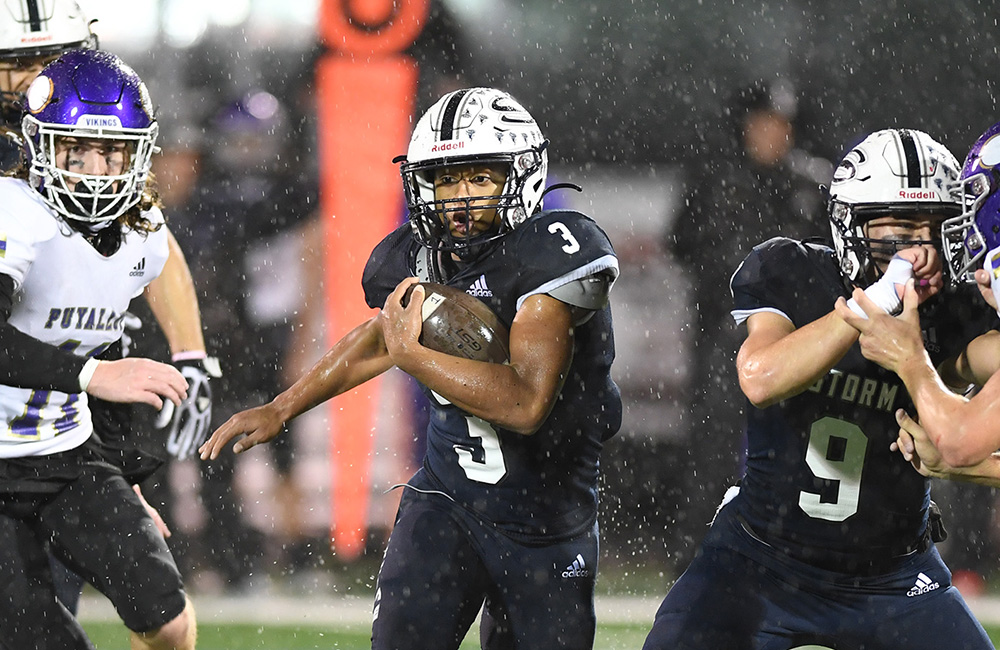 We opened the first week of the postseason with a 11-2 week, pushing our season record to 117-34 (77.5 percent). We had one near-perfect score, missing each team’s score by a single point. We also had another perfect score, just with the wrong winner.

Here are preview caps for Week 11 with predictions and links to livestreams (don’t get caught getting scammed; these have all been validated).

What: 3A state first round game

What: 2A state first round game.

Game notes: Washougal is the No. 9 seed; Highline is No. 8. The winner will play No. 16 Black Hills or No. 1 Lynden. Highline head coach Devontae Cooper, in his fourth season, has turned the Pirates from a struggling program into back-to-back 2A Kingco champions. Highline dominated league play. The Pirates’ lone loss came to 4A Kennedy Catholic, 41-6 in Week 2. Highline was less dominating in Week 10, but still posted a solid win over Orting, building a 21-0 lead in the third quarter. Washougal had problems stopping Shelton’s inside run game. Highline also likes to run, but the Pirates prefer to get the ball outside in space, allowing their athletes to make big plays. Highline hasn’t faced an offense like Washougal’s, led by QB Holden Bea, since falling to Kennedy Catholic.

What: 1A state first round game

Game notes: Cashmere is the No. 11 seed; La Center is No. 6. The winner will face No. 14 Riverside or No. 3 Nooksack Valley. Cashmere was the Caribou Trail League runner-up. The Bulldogs’ two losses came to No. 9 Toppenish (34-19 in Week 4) and league champion Omak (33-15). Omak was eliminated in a Week 10 crossover. Cashmere beat Colville 12-6 in the other district crossover. In soggy conditions last week, Cashmere QB Trenton Mason completed 11 of 14 passes for 78 yards, and the Bulldogs rushed for 133 yards as a team. Cashmere also intercepted three passes. Now the Bulldogs face a La Center defense that has been shutting down opponents lately. The Wildcat defense did not allow Hoquiam to score an offensive touchdown until after last week’s game had moved to a running clock. La Center scored 31 points or better for the sixth time in its last seven games.

Game notes: Skyview is the No. 11 seed; Graham-Kapowsin is the No. 6 seed. The winner plays either No. 14 Woodinville or No. 3 Sumner. Graham-Kapowsin tied for second in the South Puget Sound League. The Eagles have won five straight after September losses to Sumner (34-31) and Puyallup (30-13), the team Skyview beat to reach the state playoffs. G-K junior quarterback Daveon Superales has thrown for 1,719 yards and 17 touchdowns. HIs top targets are junior Jabez Woods (44 catches, 640 yards) and sophomore Khris Norris (41-495). Like the Eagles, the Storm are also young but talented. Junior quarterback Jake Kennedy has passed for 1,500 yards and 18 touchdowns. But the Storm showed they can also win with the run game and defense, which they did in last week’s poor weather conditions. Saturday’s weather will allow both offenses to open things up more.