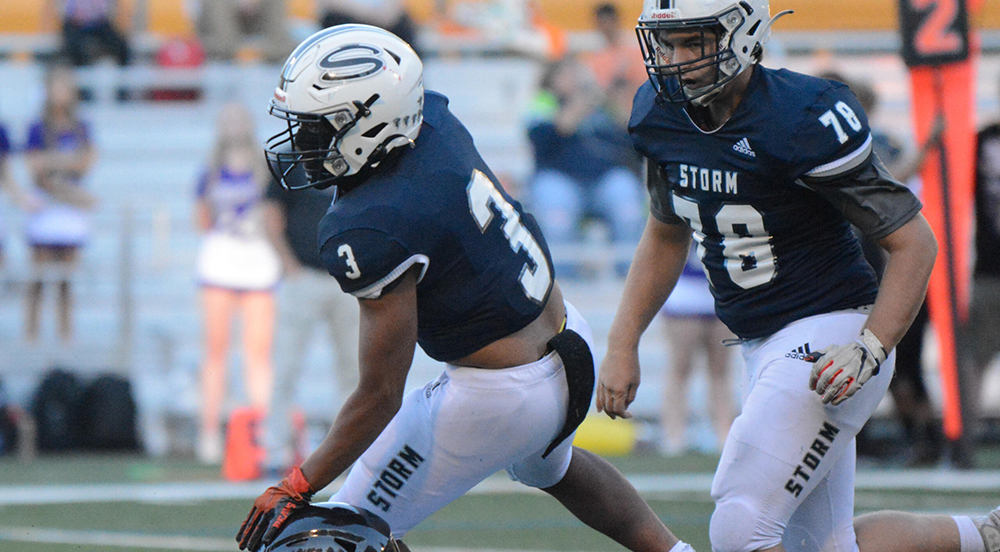 Here are preview caps for Week 10 with predictions and links to livestreams (don’t get caught getting scammed; these have all been validated).

Game notes: Puayllup posted some big games early in the season, beating Emerald Ridge and Graham-Kapowsin. But the Vikings staggered into the playoffs with back-to-back losses to Bellarmine Prep and Curtis. The Vikings like to throw the ball with their standout receiver Malachi Durant, but they have struggled to do so the past two weeks. Curtis dual-threat QB Rocco Koch gave Puyallup problems last week. Skyview QB Jake Kennedy plays with a similar style. The ability to run the ball and avoid turnovers will be key for the Storm.

What: 4A state qualifying playoff game

Game notes: North Creek’s record is not very imposing. The Jaguars come into this playoff game having lost three of their last four. But those three losses were all close games to good teams –19-15 to Skyline, 7-5 to Woodinville and 28-24 to Eastlake. The Jaguars like to lean heavily on the passing of senior quarterback Luc Naldrett. But North Creek does not want to get into a shootout with Camas. The Papermakers average 38 points a game. And the Camas defense has played much better of late.

What: 3A state qualifying playoff game

Game notes: Gig Harbor finished fourth in the South Sound Conference. One of the Tides’ three losses came against Timberline, a team Kelso rolled past 23-7 in Week 1. Gig Harbor is led by quarterback Will Landram, who has passed for 2,022 yards and 23 touchdowns. Timberline scored at least 20 points in every game this season until last week’s loss to top-ranked Yelm. Kelso likes to win by controlling the ball through the run game and a stout defense. University of Reno commit Conner Noah has rushed for 860 yards in just seven games (he rested in the rout of Heritage). He rushed for 165 yards on 33 carries and three touchdowns last week as Kelso rallied for 22-7 down to beat Evergreen.

What: 3A state qualifying playoff.

Game notes: Rainier Beach is led by Oregon-bound cornerback Caleb Pressley and running back Scottre Humphrey. Rainier Beach is the No. 9 seed out of the 32-team 3A state qualifying playoffs. The Vikings’ two losses came to No. 2 seed Eastside Catholic and No. 3 O’Dea. Mountain View has momentum coming into this matchup. The Thunder rallied late to beat 4A Richland on the road last week. Then three days later, Mountain View dominated play to win a three-team tiebreaker to earn the No. 24 seed.

Game notes: Sheton earned the No. 4 seed from the 2A Evergreen Conference through a Monday tiebreaker, so the Highclimbers will be playing on short rest. Shelton is led by senior QB Mason Goos who has passed for 1,276 yards and 11 touchdowns. His top targets are Dante Trikoff (41 catches, 300 yards, 2 TDs) and Gabriel Menefee (32-558-6). Bradley Eleton is the leading rusher with 620 yards and 13 touchdowns. Washougal junior QB Holden Bea has passed for 2,180 yards and 25 TDs. He also rushed for a season-best 135 yards and three TDs last week. Running back Liam Atkin has rushed for 700 yards and 11 touchdowns, but he has four consecutive games with 124 or more yards. He could play a pivotal roll in poor weather conditions.

What: 2A district playoff.

Game notes: Black Hills earned the No. 3 seed from the 2A Evergreen Conference after outlasting Aberdeen in the Monday tiebreaker. Quarterback Jaxsen Beck threw touchdowns passes to Maddox Hodge and Xavier Shepler. Mark Morris has been playing a lot with top rusher Deacon Dietz, who has been battling nagging injuries. But Justin McCann has stepped up nicely, rushing for 243, 105 and 162 yards the last three weeks.

Game notes: Ridgefield finished the regular season strong with wins over Columbia River, R.A. Long and Woodland to claim the No. 3 berth to the district playoff. Unfortunately for the Spudders, that means a trip to Tumwater. That has not worked for 2A GSHL teams, which have lost to the Thunderbirds in the last five years by an average margin 57-11. While the Spudders’ defense has played well in recent weeks, they have a particular challenge in stopping Tumwater’s rushing attack. The Thunderbirds rushed for 431 yards in their Week 9 win over Black Hills. Carlos Matheney rushed for 148 yards and four touchdowns.

Game notes: W.F. West’s lone loss came to top-ranked Lynden in Week 2. Since then, the Bearcats’ defense has stepped up, holding opponents to an average of 6 points a game. W.F. West held the potent Tumwater team to seven points. That will be a challenge for a Woodland team that backed it way into the playoffs. The Beavers have lost their last three games. The Beavers are led by sophomore running back Elijah Andersen, who has averaged 110 yards rushing a game.

What: 1A district playoff.

Game notes: Eatonville’s 7-2 mark includes a forfeit loss to W.F. West, when the Cruisers had several players out with COVID. They got a forfeit win against Elma. Now, the Cruisers are healthy and primed for the postseason run. RB Dylan Norman has been the prime beneficiary of Eatonville’s big offensive line, averaging 135 yards rushing.  Castle Rock has the ground game to play in sloppy conditions, led by senior Stephen Ibsen. The question is whether they can go toe-to-toe up front with Eatonville.

Game notes: The Cougars have clinched a playoff berth for the second consecutive season. And they have shown they can move the ball on the ground with Joe Callerame and Jacob Williams, Seton remains a very young team, and a playoff game at Montesano will provide some experience. The Bulldogs have a stout defense that has held opponents to 13 points or fewer six times this season.

Game notes: Tenino wants to run the ball with a bevy of ballcarries. Leading the way for the Beavers is Dylan Spicer, who has rushed for 1,481 yards and 19 touchdowns. The Knights have struggled to stop opponents this season, trying to outscore them. But the Knights want to come with a balanced attack of passing and running. That will be a challenge in poor weather conditions and tough Tenino defense.

What: 2B district playoff.

Game notes: Kalama is playing some of its best football of the season. It was a rocky start for the Chinooks, who started the season young and inexperienced. The Chinooks have won two of their last three. Raymond/South Bend has lost 2 of its last three after a 6-0 start. The two teams have three common opponents. Both rolled past Wahkiakum (Kalama 36-14; RSB 48-20) and Adna (Kalama 34-6; Adna 36-2). Kalama lost to Toledo two weeks ago 35-0, and Raymond/South Bend beat Toledo 35-20 way back in Week 1. Raymond/South Bend is more run-oriented than Kalama, which should play well in poor weather conditions.