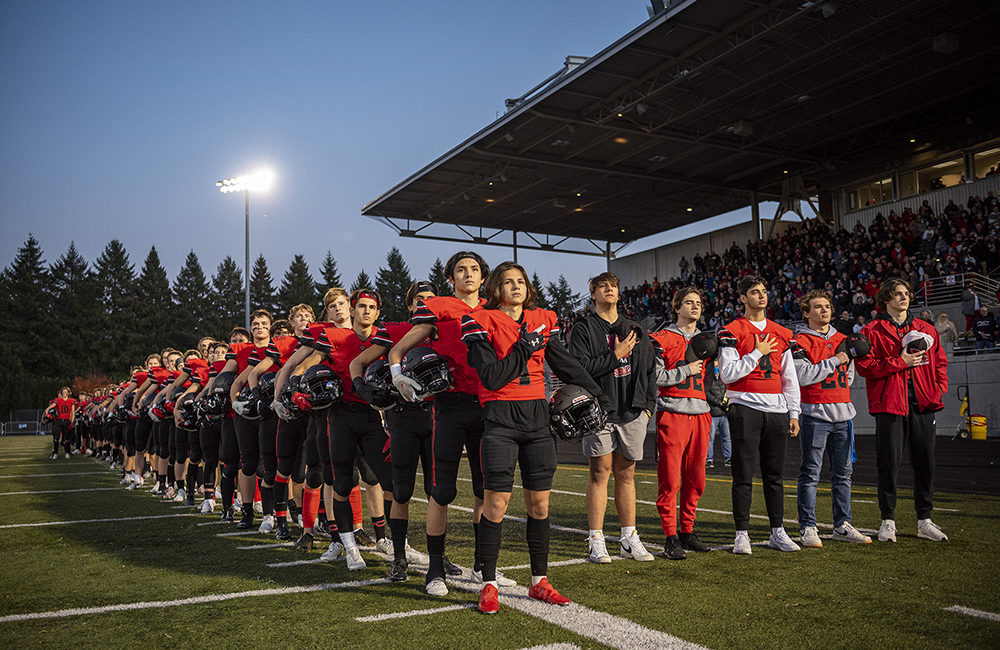 One of our two misses, we had the right score (but wrong team). Of our correct picks, several scores looked pretty close, particularly the Ridgefield-River game in which we narrowly underestimated the abilities of the kickers.

Here are preview caps for Week 8 with predictions and links to livestreams (don’t get caught getting scammed; these have all been validated).

Game notes: It seems a little odd that a team between an 0-2 team and a 2-0 team would be a pivotal game in league play. But that is what this game is. If Evergreen wins, the Plainsmen will clinch a Week 10 playoff spot and then will play Kelso next week for the 3A GSHL title. However, if Prairie wins, the Falcons could force a three-way tie for second if Evergreen also falls to Kelso next week. But Evergreen could still claim a share of the league title with a win over Kelso next week.

Game notes: Mountain View’s postseason hopes hinge on outcomes of other games. The Thunder need Prairie to beat Evergreen this week, and then Evergreen to lose to Kelso next week. Then the Thunder would be part of a three-way tie for second. Any other outcome, and the Thunder’s season will end after Week 9. Heritage is still looking for something positive to build on for 2023.

What: 4A Greater St. Helens League

Game notes: Union has shown the ability to score points, averaging 34 points a game, and scoring at least 40 points in each of the last four games. But stopping teams has been a problem for the Titans. So meeting a Camas team that averages 35.6 points a game could be a problem for Union. Camas will secure a playoff berth with a win. If Union wins, the Titans will need another win next week against Skyview to capture the league title. If not, Union could find itself in a three-way tie with Skyview and Camas. If Union loses, the Titans could still secure a playoff berth with a win next week vs. Skyview. If Camas loses, the Papermakers would still earn the second playoff berth with a win over Battle Ground and a Union win over Skyview. Or Camas could find itself in that three-way tie.

Game notes: After nearly knocking off Camas last week, Skyview is looking to regroup and face what would be essentially a playoff game next week against Union. If Camas wins this week, next week’s Skyview-Union game would be for the other berth to the Week 10 playoffs. If Union scores the upset, next week’s game for Skyview would be to force a three-way tie for the league title.

Game notes: The game could be over quickly, and not because it is going to be a blowout. Both teams like to run the ball, which should keep the clock running. Kelso rushed for 273 of its 285 yards of offense last week against Mountain View. Othello also runs a run-heavy attack. It’s a battle between a good 3A team against a very good 1A team.

Game notes: Washougal is not only the only 2A GSHL to have already clinched a playoff berth, the Panthers are assured of a Week 10 home playoff game. A win this week would lock the Panthers into the No. 1 seed and at least a share of the league title. A River loss could end the Rapids’ playoff chase if Woodland beats Mark Morris. The best path to the postseason for River is to win this game. But keeping up with the high-powered Panthers could be a challenge.

Game notes: Barring a major upset next week, Mark Morris is all but assured of a playoff spot. But the Monarchs can assure themselves of a home game in Week 10 with a win over the Beavers. Woodland could clinch a playoff spot with a win and losses by both Columbia River and Hudson’s Bay this week. It would also put the Beavers in position to claim the No. 2 spot.

What: 1A Trico League game

Game notes: Castle Rock has rolled to three Trico League wins.The Rockets can clinched a home playoff game in Week 10 with a win. King’s Way Christian had a balanced attack in last week’s win over Fort Vancouver, passing for 201 yards and rushing for 267 yards. Ryan Charlton rushed for 225 yards and four touchdowns. The Knights will need a similar effort to keep up with the potent Rockets.

Game notes: La Center dominated Seton Catholic, and the Wildcats are looking to do more of the same against the winless Bruins.

Game notes: Fort Vancouver had a great start last week against King’s Way, but the Trappers allowed the Knights to run away in the second half. If Fort wants to be a playoff team, the Trappers need to beat Seton Catholic. Seton Catholic will clinch a playoff berth with a win over Fort. The Cougars also are looking for some momentum going into their Week 9 matchup against rival King’s Way.

What: Central 2B League game

Game notes: Kacen Bach is coming off a solid game last week, passing for 239 yards and rushing for 88 yards. The Bulldogs will need another solid effort from Bach and others to help Stevenson end its Central 2B League woes. Wahkiakum has also had its league struggles, so it provides an opportunity for Stevenson.

What: Central 2B League game.

Game notes: The two programs met in the 2B quarterfinals last season, with the Chinooks prevailing. And while Kalama has played much better in recent weeks, Toledo is back to being one of the top 2B teams in the state. This game could turn out much like the Kalama-Napavine game a couple of weeks ago.

Game notes: Hudson’s Bay put itself right back in the playoff chase in the 2A GSHL. The Eagles are rooting for a Mark Morris win over Woodland. If that happens and Bay beats Hockinson, then the Eagles would be playing for a playoff spot next week against Columbia River. Hockinson, despite its four league losses, is not out of the playoff hunt yet. But the Hawks need to win their last two games, and then hope other outcomes break their way. Last week’s close call against Mark Morris shows that the Hawks are still a team to be concerned about.

Game notes: R.A. Long has some players on offense, but the defense has been an issue. Five of the Lumberjacks last six opponents have scored at least 40 points. After putting up 53 against Hudson’s Bay two weeks ago, the Spudders are capable of tallying that many points. Ridgefield is looking to stay on track to secure at least a No. 3 seed to the playoffs.