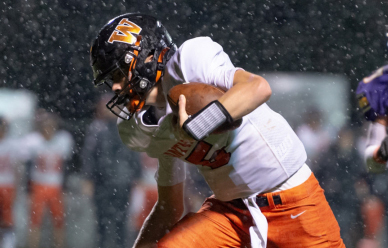 Here are preview caps for Week 4 with predictions and links to livestreams (don’t get caught getting scammed; these have all been validated).

Game notes: Ridgefield went more run-first in its win over Hockinson. Rocco Wright rushed for 159 yards on 30 carries. Logan DeBeaumont became the starting quarterback and passed for 153. Landon Kelsey had five catches for 105 yards. Bay’s two wins came against teams that struggled to run the ball. But the Eagles were routed by Prairie which could run the ball. Bay’s Mateo Varona has rushed for 384 yards and five touchdowns. But the Eagles’ passing game has struggled.

Game notes: Battle Ground’s Kameron Spencer has been the spark plug for the Tigers’ attack, passing for 637 yards and seven touchdowns and rushing for 135 yards. Heritage has won the last two meetings with Battle Ground. But the Timberwolves are very young and inexperienced this season. The Timberwolves have scored just 13 points in three games.

Game notes: Evergreen is 3-0 for the first time since 2004. The Plainsmen have tried to get many players involved. Quarterback Jayden Crace has passed for 393 yards on 28-of-38 passing. Jonathan Landry returned two punts for 40 or more yards last week, including one for a touchdown. Foss is playing an independent schedule and got its first win over 2A Foster 25-18. The Falcons have athletes, but lack depth and size.

Game notes: This is a rematch of the Week 10 playoff last season. But Kamiak does not appear to be as strong as last year’s squad, as evident by its 30-point loss to 3A Monroe. Meanwhile, Skyview is coming off an impressive win over Bothell. The Storm kept Bothell scoreless until the fourth quarter, building a 28-0 lead. LB Jalen Salavea recovered two fumbles, returning one for a touchdown. QB Jake Kennedy has passed for 600 yards and eight touchdowns.

Game notes: Prairie’s Week 1 win over Auburn is looking more impressive after the Trojans won the next two weeks. Union poses the biggest test for the Falcons to date. RB Alex Ford has rushed for 441 yards and seven touchdowns. Mountain View used the deep pass to beat Union. If Prairie is able to establish the rush, the Falcons might be able to do the same. Union QB Tyson Fuehrer has passed for 593 yards and five touchdowns. Last week, he rushed for 50 yards and two TDs. AJ Attaran has 17 catches for 286 yards and two touchdowns.

Game notes: Kelso has leaned heavily on its defense and running game in the opening weeks. Conner Noah had rushed for 298 yards. Sophomore QB Tucker Amrine passed for 277 of his 311 yards in a Week 2 win against Capital. Camas QB Taylor Ioane leads the region in passing with 792 yards and eight touchdowns. Trenton Swanson has 22 catches for 344 yards and five touchdowns. But the defense has allowed foes to score 35 points or more in every game this season.

Game notes: Hockinson is looking to bounce back from back-to-back losses. The Hawks have been relying heavily on QB Jarod Oldham, who has passed for 675 yards and six touchdowns. But four interceptions last week hurt their chances against Ridgefield. The Hawks will look to improve their run game this week. R.A. Long has been susceptible to the run. The Lumberjacks throw the ball on the majority of snaps. The offense has been able to move the ball, but not well enough to keep up with lapses on defense.

Game notes: Mark Morris grounded out 380 rushing yards last week against River, with Deacon Dietz leading the way with 241 yards. But QB Kellen Desbiens also passed for 108 yards. Langston Bartell had five catches for 53 yards. Washougal’s Liam Atkin finally had a productive day running the ball, rushing for 139 yards and two touchdowns last week. The Panthers will need more of that to keep the Monarchs from eating up time of possession and wearing down the Panthers’ defense. Holden Bea leads the region in passing, throwing for 854 yards and nine touchdowns. Sam Evers has been Bea’s top target with 16 catches for 303 yards and six touchdowns.

Game notes: Seton Catholic freshman QB Kolton Gesser has played very well since coming in for an injured Joe Callerame in Week 2. Last week, Gesser was 14 for 17 for 194 yards and four touchdowns. Ryker Ruelas has been the top receiver. But the defense has been the big strength for the Cougars, allowing the offense to build big leads. Stevenson’s offense finally got going, after managing just one touchdown in the first two weeks. QB Kacen Bach threw for 297 yards and rushed for 70 yards. He also threw four interceptions. Joseph Jenkins had eight catches for 116 yards.

Game notes: Castle Rock QB Stephen Ibsen passed for two touchdowns and rushed for another in the win against Elma. The Rockets pounded out 207 rushing yards, while holding Elma to -16 net rushing yards. After a Week 1 loss to 2A Black Hills, Montesano has outscored its next two opponents 86-0.

Game notes: After being held to -16 net rushing yards against Castle Rock, the Eagles leaned heavily on its passing game last week. Columbia-White Salmon’s offense has scuffled all season. The Bruins have not scored since scoring late in a 25-8 loss to Goldendale in Week 1.

Game notes: This is St. Helens’ fifth game of the season. The Lions beat La Salle 37-0 on Sept. 2, but have been routed in the past two weeks by Woodburn (35-6) and Hillsboro. Both Woodburn and Hillsboro used the run to beat St. Helens. Now, the Lions will have to deal with the pass-heavy Trappers. QB Kaeleb Cvitkovich has passed for 739 yards and 10 touchdowns. Evan Mendez is the region’s top receiver with 29 catches for 540 yards and seven touchdowns. The Trappers are aiming to win back-to-back games for the first time since 2010.

Game notes: Don’t be fooled by Connell’s 0-3 mark. The Eagles have played a tough early season schedule that included 2A Othello and a very strong Nooksack Valley team and an unbeaten Bonners Ferry team of Idaho. La Center worked to improve its passing game last week against Kalama. Sophomore QB Tru Feldman responded with 279 yards passing and three touchdowns. Levi Giles has 14 catches for 183 yards this season. But the Wildcats also hope to run the ball behind a solid offensive line. Jalen Ward has rushed for 282 yards and five TDs. Feldman has rushed for 148.