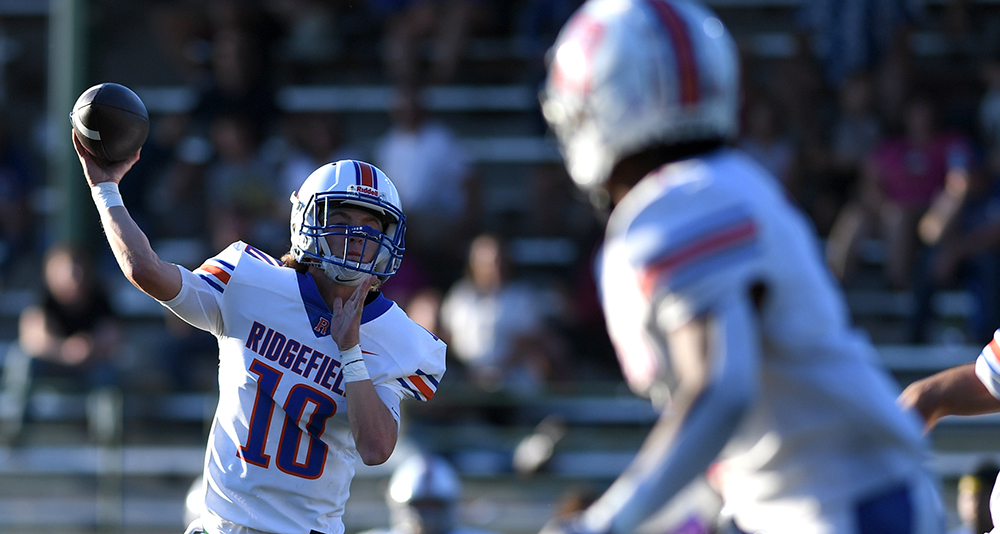 That brings our year-to-date pick percentage to a solid .703.

But that 14-4 felt a little bit hollow considering that one of the miss was a big clank — picking against Prairie which went on to win 56-0.

Aiming to do better in Week 3.

Game notes: The Wildcats’ offensive line dominated the line of scrimmage last week, opening the way for Jalen Ward and quarterback Tru Feldman. Ward has rushed for 209 yards and three touchdowns in two games, while Feldman has rushed for 185 yards and three touchdowns. Kalama’s much-smaller defensive line will face a big challenge. The Chinooks have scored just eight points in their first two games combined.

Game notes: Kentlake rolled past Franklin of Seattle 28-6 in Week 1 before falling short last week. Jayden Crace passed for 123 yards and rushed for 40 yards and TD in last week’s win over Hockinson. Shaudez Grant rushed for 73 yards and a touchdown. The Plainsmen also got Jonathan Landry back after a summer injury.

Game notes: Stevenson’s defense played much better last week after being routed by King’s Way in Week. The Bulldogs’ offense, however, has been outscored by its offense. Linebacker Joey Connell has two touchdowns to the Bulldogs offense’s one. That provides an opportunity for Fort Vancouver QB Kaeleb Cvitkovich, who has thrown for 534 yards and seven TDs in the first two games. Evan Mendez has been Cvitkovich’s favorite target. Mendez has 21 catches for 341 yards and 4 TDs

Game notes: Coming off a 6-4 season in the difficult Northwest Conference, Meridian has split its first two games – routing Granite Falls in Week 1 before falling to Chelan last week. The Trojans committed six turnovers against Chelan. Still, the Trojans figure to give King’s Way its first big test of 2022. King’s Way QB Brayden Schiefer has passed for 637 yards and nine touchdowns in two games. Jamison Duke is coming off a big game with 240 all-purpose yards with TD receptions and an interception return for a score.

Game notes: Union has lost two games, but those losses were wildly different. The Titans rolled up 427 total yards of offense in Week 1 vs. Eastlake, but was held to 33 net yards in their loss to Yelm. Bouncing back will be the key for Union. Union coach Rory Rosenbach is 6-0 against Mountain View. QB Mitch Johnson has been the spark plug of Mountain View’s offense, passing for 253 yards and two touchdowns and rushing for 148 yards and one touchdown.

Game notes: Battle Ground QB Kameron Spencer passed for 203 yards and two touchdowns to help the Tigers snap an 18-game losing streak with an impressive win at Centralia last week. Prairie dominated Hudson’s Bay in all phases last week. RB Alex Ford has 100-yard games in each game this year. He has rushed for 268 yards and four touchdowns this season. The Falcons are shooting for their second 3-0 start since 1985 (the other being 2019).

Game notes: East Valley-Yakima is 2-0 and posted a pair of shutouts. But both wins came against 1A teams (Quincy and Naches Valley). Now the 2A Red Devils will take on the 3A Timberwolves. But Heritage’s offense has struggled to put points on the board, scoring just six points in two games.

Game notes: After rolling past Burlington-Edison 34-7 in Week 1, Tumwater turned to its defense to win last week. A first-quarter safety proved the difference. Kelso has also played stellar defense this season and sophomore quarterback Tucker Amrine played much better in Week 2 than Week 1, passing for 277 yards and four touchdowns. How will the young QB respond to Tumwater’s pressure?

Game notes: Ridgefield has given Logan DeBeaumont and Brayden Malella each a shot to earn the No. 1 QB job in the first two weeks. DeBeaumont has passed for 283 yards and four touchdowns, while Malella has thrown for 266 yards and no touchdowns. Hockinson’s Jarod Oldham has passed for 447 yards and four touchdowns. The Spudders’ defense played much better last week, giving up just 14 points in four quarters to Mountain View. That could be the difference.

Game notes:  Last season, the Monarchs’ ground attack gave River problems. This year, Mark Morris can still grind it out. Deacon Dietz has 206 yards and 3 TD rushing. But the Monarchs are also a threat through the air. Kellen Desbiens is 20 of 28 for 256 yards and three TDs. River’s offense is sparked by QB Adam Watts, who has rushed for 127 yards and 1 TD and thrown for 220 yards and 3 TDs.

Game notes: Washougal’s Holden Bea has been very good in the opening weeks, passing for 637 yards and nine touchdowns. But the Panthers have been relying too much on his arm and feet. Bea has 82 of Washougal’s 124 rushing yards on the season. Woodland’s ability to keep Bea off the field will be key. Sophomore Elijah Andersen has 161 yards rushing and two touchdowns. Justin Philpot has six catches for 100 yards.

Game notes: Aizik Rothwell had an impressive debut at quarterback for R.A. Long with 353 yards and three touchdowns. But the Lumberjacks’ struggles running the ball reveal their struggles up front. All of the good feelings from Bay’s Week 1 win was flushed away in a 56-0 loss to Prairie. Still, Mateo Varona remains a bright spot, rushing for 150 yards in the first two week. The Eagles’ will look for a bounce-back game from Dean Castillo this week. But the big difference for Bay could be on the line.

Game notes: Elma had a 20-7 win over Centralia in Week 1. Isaac Phillips runs for 82 yards in Week 1 as the Eagles forced three turnovers. QB Stephen Ibsen has been the central cog in the Castle Rock attack, rushing for 262 yards and four TDs and passing for 134 yards and two TDs.

Game notes: The offense has struggled to get going in the opening two weeks for Columbia-White Salmon. QB Wesley White has rushed for 103 yards and Petey Schlegel has rushed for 79. However, White has passed for 53 yards. Montesano looks to be as strong as it has traditionally been. Not good news for the Bruins.

Game notes: Life Christian of Tacoma opened the season with a 20-0 loss to Salem Academy of Oregon. Last week’s game vs. Clover Park was postponed because of poor air quality. Seton Catholic freshman Kolten Gesser stepped in for an injured Joe Callerame last week and threw for three touchdowns. Receiver Ryker Ruelas is off to a solid start. So is the defense, which held Rochester to nine points in Week 1 and shut down Goldendale enough for the offense to take a 39-0 lead in the third quarter.

Game notes: Skyview’s rugged non-league schedule continues with a trip to Pop Keeney to face Bothell, which fell 21-13 to a tough O’Dea team. MIngo Lemley and Xavier Ahrens are two names to watch. Skyview’s Jake Kennedy has passed for 431 yards and six touchdowns in two games. He has also rushed for 125 yards. The Storm have gotten off to slow starts in each of their first two games, with big second halves. They will want to avoid that against Bothell.

Game notes: Camas rebounded very nicely in almost knocking off Glacier Peak last week. Glacier Peaks is ranked No. 2 in Class 4A. Camas QB Taylor Ioane has thrown for 434 yards and five touchdowns. Trenton Swanson has 11 catches for 175 yards and three touchdowns. Titan Brody has rushed for 112 yards. Lincoln had a 28-21 win over Auburn RIverside in Week 1. The Abes are led by QB Gabarri Johnson, a University of Missouri commit. Drake Granberry is his top target. Granberry had four catches for 114 yards and two TDs last week.