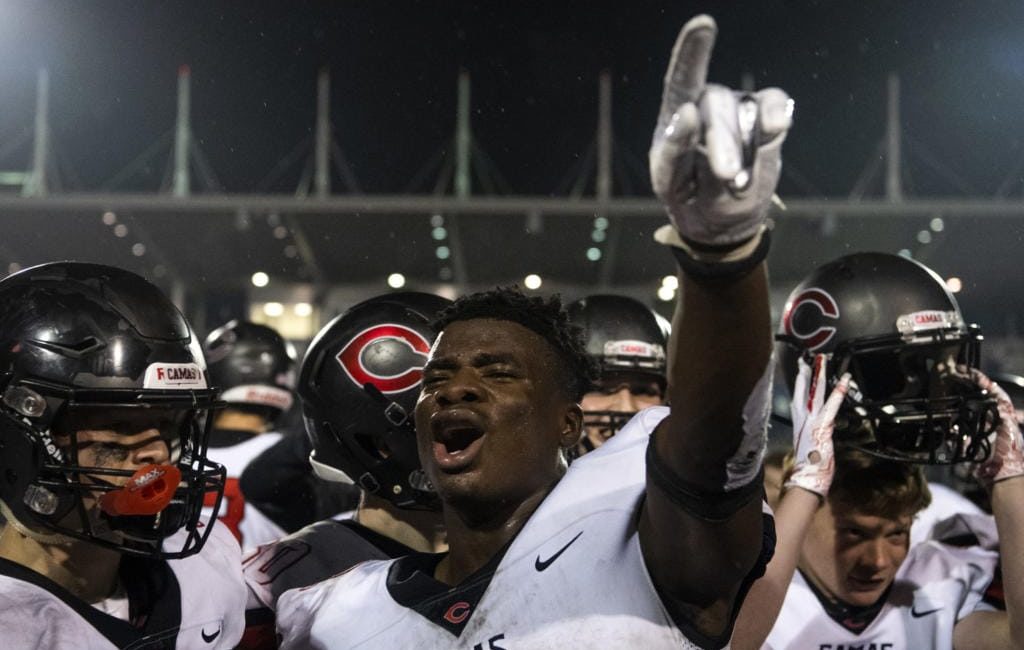 Nine players from Southwest Washington were placed on the Seattle Times’ annual Chips Lists of the 100 college football prospects for the Class of 2021.

Blue chips: An athlete who could start and star at a Division I college. There were seven blue chips on this year’s list.

Red chips: A player who could start in a major conference like the Pac-12. There are 12 red-chip players on the list.

White chips: The other players receiving top college looks from all levels. This consisted of the other 81 players of the Times’ list of the top-100 in the state.

There were no blue-chip or red-chip players from Southwest Washington. But nine players were considered white-chip players.

The 5-11, 195-pound running back was an Associated Press first-team all-state pick and a Columbian All-Region pick after rushing for 1,559 yards and 29 TD in 13 games in 2019. He signed with Nevada in December. He suffered a torn ACL earlier this month.

The 6-5, 255-pound defensive lineman was the 1A Trico League defensive player of the year and made the Associated Press all-state first team in 2019 with King’s Way Christian. He signed with Army in December.

The 6-0, 200-pound athlete made a verbal commitment in October to Portland State. Packer earned Trico League all-league honorable mention in 2019.

The 6-1, 175-pounder was a first-team all-3A Greater St. Helens League selection at receiver and defensive back in 2019. He had 25 catches for 307 yards and two TDs last season.

The 6-2, 180-pound quarterback was a second-team all-4A Greater St. Helens League pick. He passed for 1,136 yards and 15 touchdowns in eight games before suffering a season-ending injury in 2019. He signed as a preferred walk-on with Oregon State in December.

The 6-5, 320-pound offensive tackle was a first-team 3A Greater St. Helens League all-league pick in 2019 and earned 3A all-state honorable mention. Schlaefli announced he will play junior college football for Riverside (Calif.) College.

The 6-2, 195-pound quarterback played last season at Lake Oswego (Ore.) after transferring midway through his sophomore year from Westview (Ore.). Woodin has offers from Linfield College and Western Oregon.

The 6-3, 205-pound receiver/defensive back was a second-team all-4A Greater St. Helens League pick at receiver in 2019. He caught 33 passes for 593 yards and 8 TD in 10 games last season. He has verbally committed to the University of San Diego.