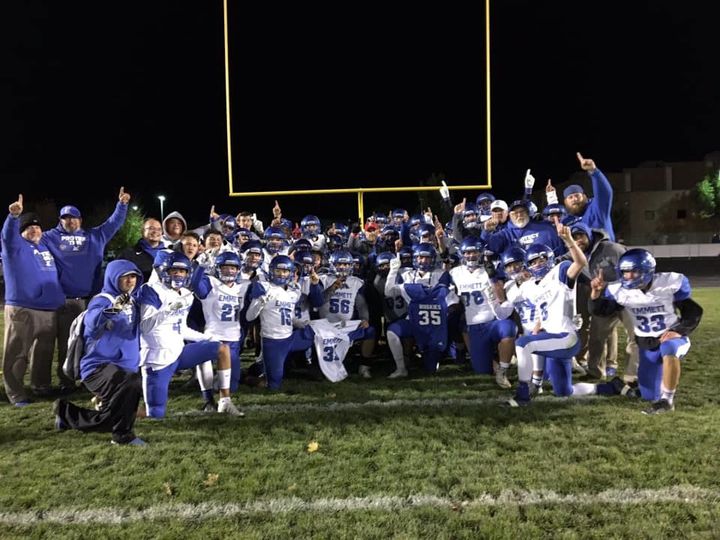 The Huskies from Emmett, a town of 6,500 just north of Boise, have had a season unlike any other.

First, there was the uncertainty of the COVID-19 pandemic, although the Huskies had no game directly impacted by the virus this season.

On Oct. 2, Emmett was at risk of losing a game by forfeit that it lead 35-0 at Caldwell when the game was called because activist Ammon Bundy, who has two sons on the Emmett team, refused to abide by Caldwell School district policy by wearing a face covering, then refusing to leave school grounds.

However, athletic directors from both schools met and agreed to let the 35-0 score stand as the final, starting a three-game win streak for the Huskies heading into the final week of the regular season.

But last Friday night’s game at Vallivue High of Caldwell was postponed one day after Emmett learned that one of its players died suddenly on Friday.

The name of the player nor the cause of death was released. But when Emmett took the field Saturday at Vallivue, the Huskies displayed the uniform of No. 35, which according to the team roster belonged to senior cornerback/receiver Jesse Wade.

According to an obituary posted by Potter Funeral Chapel of Emmett, Jesse James Wade, 17, of Emmett, passed away at home on Friday.

“Jesse received his schooling from the Emmett School District,” the obituary read. “He was a senior at EHS. He was a very well-known varsity wrestler as well as a member of the varsity football team. He loved fishing and the outdoors.”

On Saturday at Vallivue, the game was back-and-forth affair which tipped toward Vallivue 17-14 late in the third quarter.

A few moments later, Westyn Smith recovered a Vallivue fumble to secure the win and the Huskies’ first 4A Southern Idaho Conference championship.

“Somebody asked me, ‘Can the team withstand this?’ ” Emmett coach Rich Hargitt told Scorebooklive.com. “I said, ‘I’ll be honest with you, if they can go down and emotionally tie all that back together and win this game, they’re better men than me and I don’t deserve to coach them. This is 22 years of coaching for me, but this has been by far the most magical and special season I’ve ever been a part of.”

Emmett tied Bishop Kelly atop the Southern Idaho Conference at 5-1, but Emmett’s last-minute win over Bishop Kelly gave the Huskies the title.

Bishop Kelly needed Emmett to lose on Saturday to claim the title. But that didn’t stop several Bishop Kelly players from coming to speak to Emmett players on Saturday morning and offer them some encouragement during the Huskies’ difficult time.

Bishop Kelly team captain Colby Weikert told the Huskies: “I just wanted to say when I heard the news, even though I didn’t know him personally, it was really sad to hear because nobody should have to go through this. And the thing about football is that it brings everyone together as a family and these are your brothers. And you’ve got to remember to have each other’s backs always. You never know what people are going through. So always support your family and play for them. So good luck tonight, guys, and we have all of you in our prayers.”

Emmett (7-2) will open the Idaho 4A state playoffs on Friday at home against Minico of Rupert. Bishop Kelly will host Pocatello on Friday.