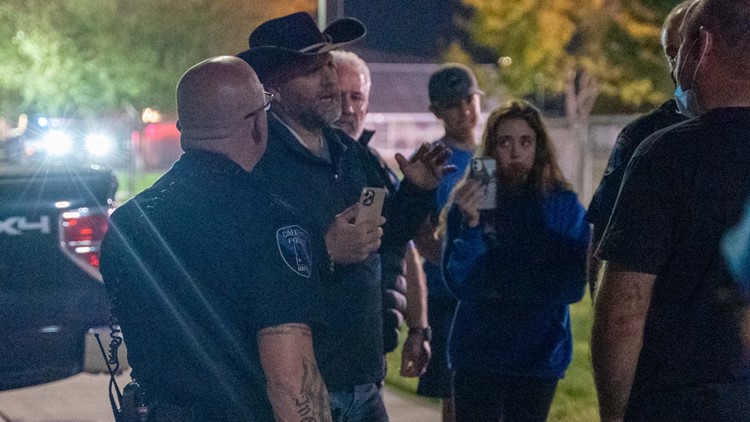 High school football games across the country have been postponed or canceled by coronavirus outbreaks this fall.

Meanwhile, many other games have been able to be played by following safety protocols regarding the virus.

On Friday in Idaho, a high school football game was ended early by a political protest.

Ammon Bundy, who led an armed standoff against federal agents in Oregon in 2016, caused Friday’s high school game against Caldwell and Emmett high schools to be called off a halftime because Bundy refused to wear mask. Bundy’s son plays for Emmett High.

Bundy appeared at Friday night’s game at Caldwell, just outside of Boise, not wearing a mask. When told about the Caldwell School District policy requiring all visitors to wear a mask on school property, Bundy refused to wear one or leave the property.

“A small group of visitors refused to follow the safety requirements, including wearing face coverings, and were denied admittance to the game,” Caldwell district spokeswoman Allison Westfall wrote in an email to parents that was also provided to the Idaho Statesman. “They were told they could watch from Brothers Park. Instead, they continued to loiter on the property and became disruptive.”

Caldwell police officers were called to the scene. They notified Bundy of the school policy, but did not a arrest or require him to leave the scene. In videos of the confrontation, the police officers, likewise, were not wearing masks.

“Officers prefer not to use physical force for non-violent crimes unless it is absolutely necessary,” police spokesman Joey Hoadley wrote in an email response to questions from the Statesman. “In this instance, officers opted to provide warnings on behalf of the Caldwell School District and once they were not heeded, wrote a criminal report describing the incident to the prosecuting attorney’s office for a charging decision for criminal trespass.”

Bundy was arrested twice in August for trespassing at the Idaho Statehouse in Boise. Bundy has led a group protesting restrictions put in regarding the COVID-19 pandemic since March, and those protests led to him being banned from the statehouse property for a year.

On Friday night, he took his protest to a high school football game.

Emmett was leading Caldwell 35-0 at halftime when Caldwell officials threatened to end the game if Bundy and other did not leave school grounds.

Emmett football coach Rich Hargitt went out to talk to Bundy, letting him know that his actions could lead Emmett to forfeit the game, possibly costing the team a playoff berth.

“They were winning the game, they’ve been having a great season, and they’ve worked hard,” Woods wrote in an email statement late Friday night. “We were the visitors. We should respect the host’s policies and procedures. Whether you agree or not when it comes to masks, the football team should not have to suffer the consequences. I’m proud of the Huskies. They did not ask for this.”