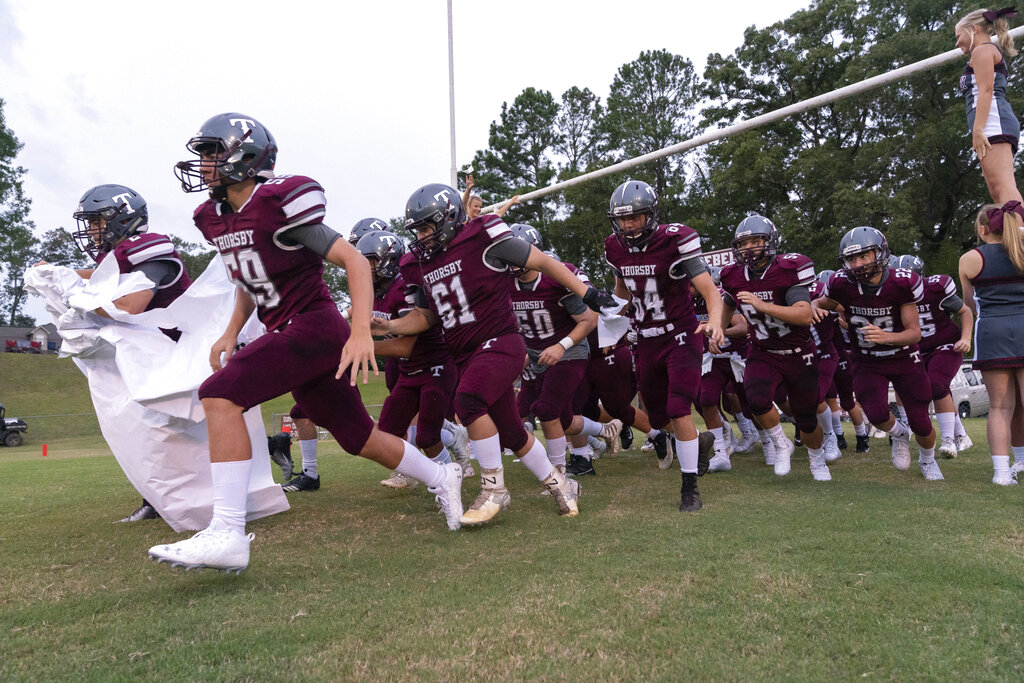 THORSBY, Ala. (AP) — It’s mostly quiet in the Alabama farming community of Thorsby aside from trucks and trains that rumble through bound for someplace larger. Remembering directions to the town’s football stadium isn’t hard; there aren’t that many roads to take or turns to miss along the way.

It’s there, on Susan Bentley Field, that the Thorsby Rebels took on rival Jemison High School on Thursday night in their first game of the season. Prep football is returning in a high-stakes test of whether players can crash into each other, fans can scream and bands can play without worsening the coronavirus pandemic.

The mayor, who volunteers as a sideline official, is leery yet hopeful the town can avoid a virus outbreak.

The game began with Thorsby, in maroon uniforms, kicking off to Jemison, in white. A big cheer went up when Jemison scored a touchdown on its first possession. Anyone entering the stadium was supposed to wear a face covering, but many didn’t.

Others put on a mask just outside the chain-link fence and took it off once inside. Hundreds of people filled concrete bleachers, and dozens more stood along the fence that ringed field. Some family groups were spread out, and few people wore masks.

Wearing a clear shield over her face, Carolyn Endress tilted her head back to take a photo of one of her two grandchildren who play in Jemison’s marching band. She said it was good to have football back.

“I wish it was under better conditions though,” she said.

While school and athletics officials said they were taking multiple precautions as dozens of games kick off across Alabama on Thursday night and Friday, some teams already have canceled games after players or coaches were infected during summer practice.

Steve Savarese, the executive director of the Alabama High School Athletic Association, said the road to the first game was a challenge. Umbrellas and masks both make an appearance on a drizzly evening at an Alabama high school football game between Jemison and Thorsby, Thursday, Aug. 20, 2020, in Thorsby, Ala. High school football returned to Alabama in a test of whether players can crash into each other, fans can scream and bands can play without worsening the coronavirus pandemic. (AP Photo/Vasha Hunt)

“I’m just excited to watch our students, our coaches and administrators, spectators … take an escape from the health challenges we all are facing and just enjoying life again,” he told a news conference this week.

But the coronavirus has infected more than 106,000 people in Alabama and killed at least 1,876, and reminders of the toll will be everywhere. Tape covers seats at some stadiums to keep fans spread apart; concessions options are limited in places and bands and cheerleaders may not travel to away games.

While schools in Utah already have staged games, 16 states including California and Illinois are not playing prep football at all this fall, according to the National Federations of State High School Associations. Others are playing with altered schedules or new rules for the pandemic.

In rural Chilton County at Thorsby, fans were supposed to wear a mask to enter and stay at least 6 feet (2 meters) apart once inside the gate. Thorsby only has five police and school staffs are small, leaving personal responsibility as the main enforcer.

“Once people come inside they’re adults and we expect them to act like adults,” said Principal Corey Clements.

The schools are in neighboring farming towns that lie along U.S. 31 about 50 miles (80 kilometers) south of Birmingham, and Clements expects paid attendance of at least 1,000 people, the equivalent of about half of Thorsby’s population. Extra bleachers are being brought in for the anticipated crowd.

Thorsby coach Daryl Davis said the coronavirus that causes COVID-19 has yet to show up among his players, and he hopes it stays that way. “We’ve been fortunate,” he said.

But firefighters, police and other city workers already have been sickened by the virus, and a pharmacy in Jemison temporarily shut down after a worker was infected. Thorsby Mayor Robert Hight fears a fresh outbreak if people don’t take the threat seriously.

“They’ve got their guides that they’re going by, but I don’t know how it’s going to go. I hope they use common sense,” said Hight. His college-age son had a mild case of COVID-19 as it surged in the area following July 4 parties at a nearby lake.

The state granted approval for fans to attend games but left it up to local school districts to set rules for limiting the spread of the virus. Some systems limited stadium capacity to as little as 25% of normal and encouraged electronic tickets. Others, like Thorsby, did not cut capacity but are requiring masks and asking people to stay apart.

Infections have been on a downward trend in Alabama since a spike blamed on July 4 crowds prompted a statewide order requiring masks in public places when distancing can’t be maintained. There also are rules changes and recommendations for safety during football.

Only one team captain will be allowed on the field before the kickoff and no team handshakes are allowed. Team areas on sidelines are expanded to allow for social distancing, and players aren’t supposed to share water bottles or towels. Referees can wear face masks and use electronic whistles to avoid spit flying at the end of each play.

But Dr. Ellen Eaton, an infectious disease specialist with the University of Alabama at Birmingham, said the football action on the field might not be as risky for transmitting the virus as activities commonly associated with the season.

“It’s our culture: You have a meal together, you ride together, maybe you spend the night,” she said. “It’s what makes it fun.”

While people can develop symptoms within days of exposure to the virus, it will probably take a few weeks to see whether restarting schools and allowing athletic competitions worsens the pandemic, Eaton said.

“I think late August, early September we’ll begin to see infections if we’re going to,” she said. “And then we’ll be ready for Labor Day and all that may bring.”