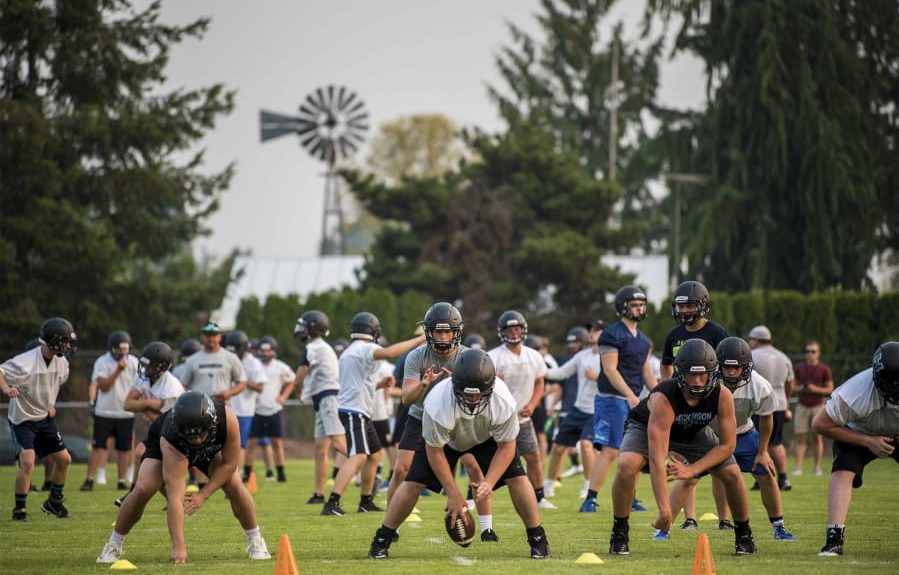 Nothing has changed regarding the 2020-21 high school sports calendar in Washington, apart from the guidelines released by the Washington Interscholastic Activities Association last week.

As of right now, fall practices for football in Washington are scheduled to start Aug. 19, with the first games scheduled for weekend of Sept. 4.

But some states have already made the decision to delay the start of their fall high school sports seasons, while other states are considering flipping the fall and spring sports seasons.

On Tuesday, after Tennessee governor Bill Lee extended his state of emergency through Aug. 29, the Tennessee Secondary School Athletic Association announced that the high school football season would not start as scheduled on Aug. 21.

“Based on the extension of the Governor’s order, football and girls soccer cannot begin their seasons as originally scheduled,” a TSSAA statement read. “We are in the process of developing regular season and postseason options to present to the TSSAA Board of Control for their consideration. The Board will ultimately make the decision as to how this will impact the postseason and if any adjustment can be made to regular season competition.”

In Tennessee, practices in pads were scheduled to begin the last week in July with the first games slated for Aug. 21. The state of emergency in Tennessee limits “contact sports with a requirement or substantial likelihood of routine close contact.”

“While the Governor’s order is in place, member schools cannot have any competition or scrimmage with other schools and cannot have close contact activities during their fundamental practice in the sports of football, 7-on-7 football, girls soccer, wrestling and basketball,” the TSSAA statement read.

Also on Monday, Arizona announced it is delaying the start of the fall sports season.

In its original schedule, football practices in Arizona were set to begin July 29, with the first week of games on Aug. 20-22.

But on Monday, the Arizona Interscholastic Association delayed the resumption of all school-related athletics and activities until Aug. 17, resulting in a delay of the start of competition seasons.

“I’m also calling on the Michigan High School Athletic Association to consider postponing fall sports that have the impossibility of social distancing that’s a part of them; consider moving those to the spring and running some of the more individualized sports like track and field or tennis or golf to the fall,” Whitmer said. “I anticipate a decision coming from them somewhere around July 20 to 25. That’s what they’ve indicated.”

The idea of flipping season is being considered in many states around the country.

The Dallas Morning News reported Sunday that the idea of flipping season has support from several Dallas-area football coaches and a formal proposal to Texas’ prep sports governing body was expected to be made later this week.

Practices in Texas were scheduled to begin Aug. 3 with the first games slated for Aug. 27-29. But with COVID-19 cases on the rise in Texas, the prospects of starting the season on time begin to time.

“Since August, September will not be any different from now as far as the virus is concerned, spring seems like the best bet,” Garland Lakeview coach Kendall Miller told the Dallas Morning News.

Arlington Sam Houston coach Anthony Criss said, “Football in the spring is better than no football at all, as long as kids, coaches and parents are safe. The main concern is the safety of all that are involved.”

The executive committee of the Mississippi High School Activities Association called an unscheduled meeting Tuesday to discuss the possibility of flipping the fall and spring sports seasons.

No action was taken Tuesday, the Oxford (Miss.) Eagle reported, but rising numbers of COVID-19 cases as a result of the Fourth of July weekend could force action, said Don Hinton, executive director of the MHSAA.

“We’re trying to still see where we could possibly be for the fall season by the first option delaying the season,” Hinton told the Oxford Eagle. “Of course, football is the major issue because of the contact. It’s a high-risk sport as opposed in the fall to volleyball, swimming and cross country. … Bottom line is, we discussed options. We wanted to see what this next weekend brings as far as the virus is concerned.”

Practices for fall sports in Mississippi are scheduled to start July 27, and on Aug. 3 for football.

The idea is also being discussed in states like Maine, Ohio and Maryland, among others.