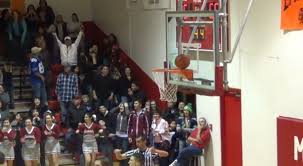 Grandview was playing at Prosser in boys basketball on Saturday.

The game was tied at 65-65 in the waning seconds of the fourth quarter. Prosser had the ball, working for the final shot.

But before the Mustangs could get a good shot, Grandview created a steal, which started a fast-break to the other basket as the final seconds ticked off the clock.

Just before the clock hit 0:00, a Grandview went for the game-winning lay-up, and this happened. By rule, this is a dead ball. Overtime.

Grandview eventually won the game 72-70 in overtime, to remain unbeaten on the season.

How did the game end?

Grandview’s Isaiah Gonzalez made a steal and drove the length of the court for a layup at the overtime buzzer.

And this time the ball went in the hoop.