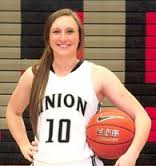 There’s a girls basketball team in Clark County that has three seniors who have already signed with college programs.

And it’s not Prairie.

Tessa Vanderpool became the third Union High School girls basketball player to sign with a college program when she signed with Southern Oregon.

Vanderpool set the single-season assist record as a junior last season at Union, A three-time all-league pick, she was an all-star for her club team, Oregon Elite, at the Music City Madness tournament in Nashville, Tenn., last summer.

“We had been watching Tessa for the last couple of years, but this past summer she really stood out in the July recruiting period and we knew she would be a perfect fit at SOU,” Southern Oregon coach Lynn Kennedy said. “She has the ability to score as well as run the team. Tessa is a fierce competitor and definitely has a sense of pressure defense. She’ll be a valuable addition.”

Also signing from Union were Jessica Chatman with Brigham Young, and Tuileisu Anderson was expected to sign with Colorado State University Pueblo.

Chatman is the daughter of former BYU player Jeff Chatman and the younger sister to Jordan Chatman, who joins the men’s team next year after returning from serving an LDS mission.

Jessica can shoot, drive, she’s smart and is an all-around player,” BYU coach Jeff Judkins told the Deseret News of Salt Lake City. “She is a good defender and an excellent rebounder and will play the 2 and 3 positions for us . Her versatility will add to our depth as a team.”

Jessica Chatman, who made a verbal commitment to BYU during her sophomore season at Union, will defer her enrollment for 18 months so she can go on an LDS mission next spring.