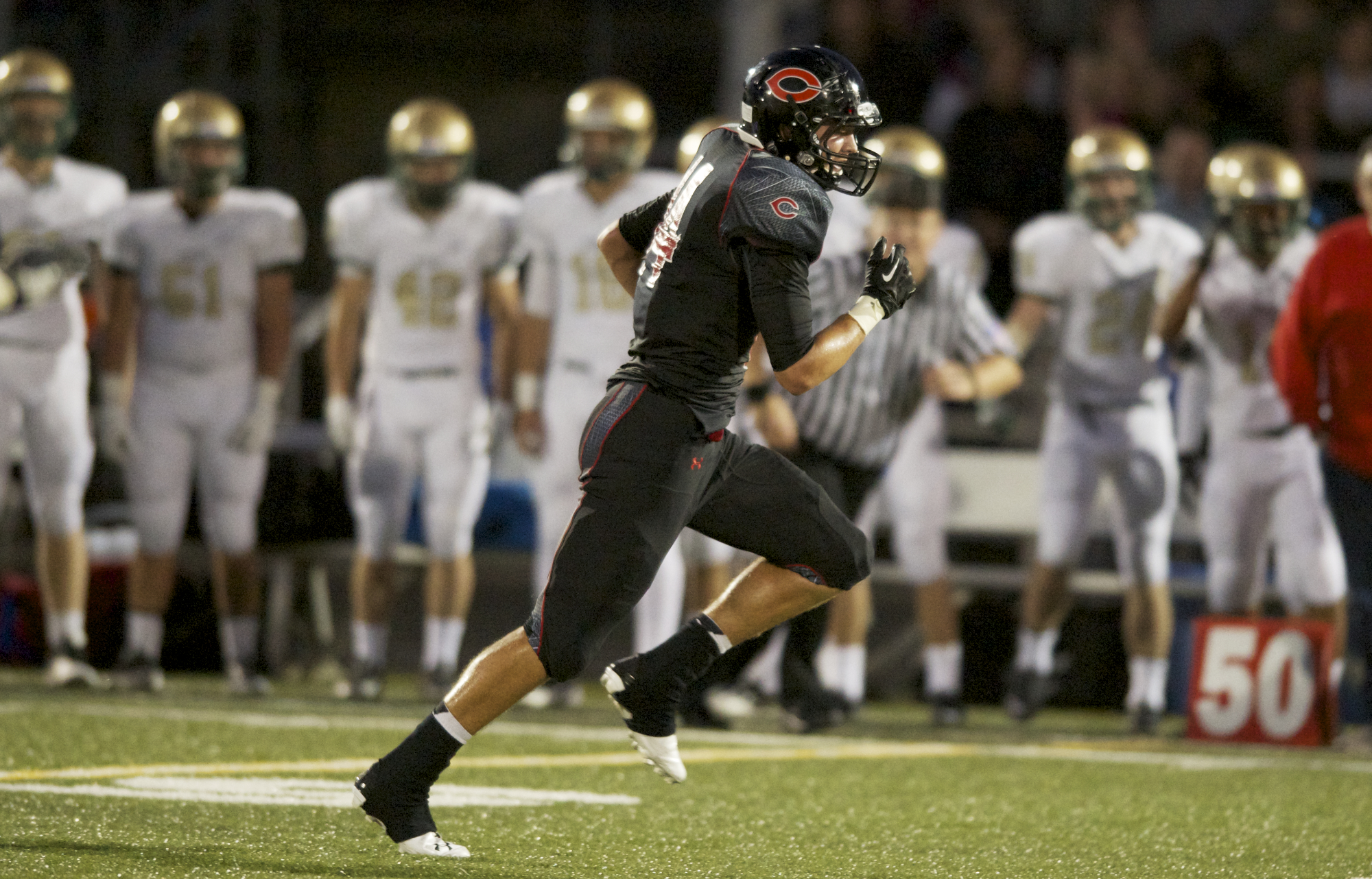 Last week was a rough one for picking winners — 5-6.

Unpredictable teams are hard to predict.

So as we move onto the postseason, we hope to have better luck picking winners in games involving consistent teams.

About Monroe: The Bearcats opened the season 1-4 before winning three consecutive games to become a playoff team. Last week, the Bearcats gave up two fourth-quarter touchdowns in a 28-21 loss to Cascade. QB Andrew Zimmerman threw for 192 yards and two TDs in the loss. RB Gabe Moore is a threat to run the ball or a pass receiver. Monroe has not advanced to the state playoffs in more than 20 years.

About Camas: After reaching the state semifinals last season, Camas opened the year as the top-ranked team in the state and stayed there. QB Reilly Hennessey haas passed for 2,081 yards and 23 TDs. Zach Eagle (40 catches, 830 yards, 6 TDs) is Hennessey’s top target, but the Papermakers have plenty of weapons. RB Nate Beasley rushed for 764 yards and 17 TDs.

Bottom line: The Papermakers, who pride themselves on defense, gave up 38 points and a ton of yards last week against Battle Ground. You can be sure coach Jon Eagle spent the week working on tightening things on defense. Even with all those points allowed, Battle Ground became the ninth team this season to fall behind by 40 points or more to Camas.

About Union: The Titans’ like to control the game with their solid offensive line and bruising back Leon Siofele. Siofele has rushed for 1,728 yards and 19 TDs this season. QB Nolan Henry is an effective passer (89-for-135, 1,263 yards, 8 TDs), and may be called upon to be a bigger part of the offense.

About Issaquah: The Eagles’ non-league schedule included loss to two top 3A teams (Mount Si and O’Dea). Issaquah’s other loss came to No. 2 Skyline. The Eagles led the game 10-3 at halftime before losing 30-17. Issaquah is led by QB Jack Neary, who has passed for 2,396 yards, 28 yards and five interceptions. Derek Chapman (768 yards) and Tommy Nelson (764) share the receiving duties.

Bottom line: Both of Union’s losses have come against top-ranked teams (Camas, Jesuit of Portland) and both were lopsided affairs. The 4A GSHL’s top two QBs (Battle Ground’s Colston Vukanovich and Camas’ Reilly Hennessey) had success against Union. That doesn’t make this matchup a good one for the Titans.

About Skyview: It’s been an up-and-down season for the Storm. They opened to two losses while trying to see what players would take over key roles. Zac Shomler took over at QB, and Nate Arriola became the leading rusher. But Arriola was injured in Week 6 and didn’t return until last week, when he rushed for 111 yards. But he left again early in the third quarter and did not return. His status for this week is uncertain.

About Curtis: The Vikings have won seven games in a row after suffering a 24-14 loss to No. 3 Graham-Kapowsin in Week 2. Last week, Curtis routed Federal Way using a blocked punt and fumble recovery on a kickoff return to take control.

Bottom line: We’ll say this much about the Storm: They are a determined and scrappy bunch. But going on the road against a hot Curtis team is a tall order.

About Columbia River: The Chieftains’ offense has run through QB Jonathan Branson and the read option. He’s rushed for 625 yards and TD andpassed for 1,138 yards and 13 TDs with a completion rate of 66 percent. However, he left last week’s game against Mountain View with an injury. Gabe Evenson replaced him and threw two second-half TD passes and rushed for another as the Chieftains tried to rally from a 27-7 deficit.

About Cleveland: Cleveland went 5-1 in the Metro, 0-3 outside of conference play. That includes a 22-7 loss to Class 2A Klahowya in Week 1. The Metro Conference has been top-heavy in recent years and most of the league’s teams have struggled in state preliminary games.

Bottom line: The last time a River team went to Seattle Memorial Stadium, a 4-5 Chieftain team beat Metro champion Nathan Hale 41-18 in 2009. Last year, River opened the postseason with a 27-3 win over another Metro team, Bainbridge. Even with Branson out or at less than 100 percent, the Chieftains should have enough to beat Cleveland.

About Elma: The Eagles went into last week’s game with a chance to claim the 1A Evergreen Conference title with a win. Instead, they were routed by a resurgent Montesano team. That dropped Elma to the No. 4 seed from the EvCo. Elma opened the season with a 7-0 loss at Hockinson. Elma coach Jim Hill said the Eagles must do a better job tackling, recording 37 missed tackles against Monte.

About La Center: La Center supplanted Woodland as the team to beat out Southwest Washington with their dominating performance over the Beavers last week for the Trico League championship. RB Connor Fulton leads the Wildcats with 1,195 rushing yards and 18 TDs. But don’t look past QB Wyatt Aguirre. Aguirre has passed for 684 yards, but 14 of his 32 completions this season went for TDs. With a win, La Center would advance to the state playoffs as the No. 2 seed from District 4, unless White Salmon beats Tenino.

About Rochester: The Warriors went from playing for their first league championship since 1999 to being the No. 3 seed from the Evergreen Conference and being forced to travel in the district playoffs. Still, this season has been quite a turnaround for Rochester, which went 1-8 last season. RB Tyler Yarber has rushed for 1,677 yards and 19 TDs.

About Woodland: RB Eli Whitmire had rushed for 835 yards and 16 TDs on just 56 carries this season. QB Hunter Huddleston has passed for 1,531 yards and 23 TDs, and he like to distribute the ball to several different receivers. But both struggled last week against La Center, and will be looking to regroup.

Bottom line: The two teams have both faced Montesano. Rochester lost to the Bulldogs 32-31, two weeks after Woodland routed Monte 47-3.

When, where: 7 p.m., McKenzie Stadium

About Mountlake Terrace: The Hawks were the No. 3 team in the WesCo 3A South Division and earned this matchup by beating Stanwood last week. Chance Ragsdale has rushed for 1,420 yards and 15 TDs. He had 196 yards and 3 TDs last week against Stanwood. The Hawks got a boost when big RB Malcolm Johnson joined the team after moving in from Texas. Johnson rushed for more than 100 yards last week.

About Mountain View: Like the Hawks, the Thunder like to keep the ball on the ground. And each week, it seems to be a different runner leading the way, which is a credit to the Thunder’s strong offensive line. Austin Mace leads the team with 984 yards and 9 TDs. Preston Jones has 763 yards and 13 TDs. Nicholas Wright has 488 yards and 8 TDs. He had 269 yards and 4 TDs last week. And when they’ve had to pass, QB Lex Reese has been efficient, completing 40 of 69 passes for 830 yards and 9 TDs.

Bottom line: This is a battle of strength on strength. Since being shut out in Week 1 to Union, the Thunder have been rolling, scoring at least 24 points in every game since, at least 34 since Week 3.