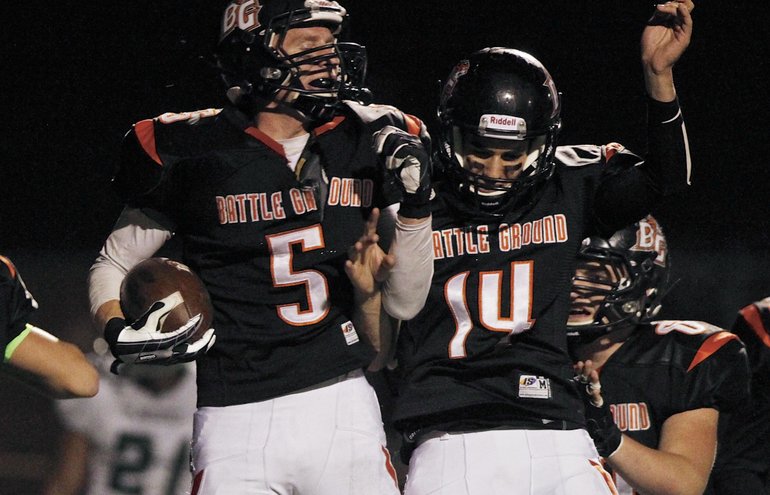 I went 10-1 with the picks, missing only on the Washougal-Aberdeen game. That was particularly annoying as it was the only pick that the Score Czar and myself differed on.

I guess for this week that makes me a mere Score Serf.

Here are our previews and picks for Week 8.

All previous meetings happened on Oct. 19, 2012, unless noted

Players to watch: For Battle Ground, RB Justin Smalley had another big game for the Tigers, rushing for 157 yards and three TDs last week; For Skyview: With RB Nate Arriola out with a hamstring injury, the Storm depended more on their pass game last week. And Jacob Dennis delivered with 8 catches for 178 yards.

Game notes: Battle Ground remains in the mix for the league title if the Tigers win out vs. Skyview and Camas. A tall order to be sure. But it just about makes this game a must-win for the Tigers if they want to make the playoffs. A win for Skyview would just about clinch a playoff berth for the Storm and keep them in the hunt for the No. 2 spot.

Players to watch: For Heritage, teams try to take E’Lon Mack out of the game. He only caught one pass last week, but it went for a 42-yard TD; For Camas, QB Reilly Hennessey was The Columbian player of the week after passing for two TDs and rushing for two more.

Game notes: Last week’s loss ended Heritage’s playoff hopes. Camas can lock up a share of the 4A GSHL title and the No. 1 seed to the playoffs with a win and a Skyview win over Battle Ground.

Players to watch: For Evergreen, as the offense has struggled with turnovers, Brody Bagnall had led the defense. He had a 7-yard interception return for a TD last week; For Union, Leon Siofele rushed for 82 yards vs. Camas, which is actually quite an accomplishment.

Game notes: Despite three straight lopside losses, the Plainsmen are still alive for potential playoff spot. If Evergreen finishes the season 2-0 and Union and Battle Ground both go 0-2, a three-way tie would exist for third place between the Plainsmen, Titans and Tigers. Union can lock down a playoff berth with a win and a Skyview win over Battle Ground.

Players to watch: For Kelso, Lloyd Melone rushed for 150 yards against Fort last week; For Mountain View, the Thunder come at teams with their variety of RBs. Austin Mace shined last week against Bay with 160 yards.

Game notes: The Thunder suffered a tough loss at Kelso last year, so you can bet the Thunder won’t look past the Hilanders. If Mountain View beats Kelso, the Thunder will play for the 3A GSHL next week against Columbia River. Even if Kelso loses, the Hilanders can seal up the No. 3 seed with a win at home against Prairie next week.

Players to watch: For Prairie, Ronnie Evenden has taken over the load as the lead running back and responded with big games.

Game notes: The Trappers could potentially force a three-way tie for the third in the 3A GSHL by ending the regular season with back-to-back losses. Prairie will advance to the playoffs as the No. 3 seed with wins over Fort and Kelso.

Players to watch: For Hudson’s Bay, RB Bryan Hopster had a good game against Mountain View (123 yards), which was big after QB Jeremy Matheney left with an injury. For Columbia River, the Chieftains’ offense starts with the QB, Jonathan Branson, running and throwing the ball.

Game notes: Hudson’s Bay is out of the postseason mix. Columbia River wants a win to send the Chieftains into a matchup with Mountain View next week for the league title.

Players to watch: For Aberdeen, Joel Dublanko had a TD run and pass last week against Washougal; For Hockinson, QB Jess Krahn almost led an upset bid for the Hawks with two TDs pass and a TD run vs. R.A. Long.

Game notes: The only shot Aberdeen has of making the playoffs is to finish the season with two wins, then hope Hockinson beats Washougal next week to force a three-way tie for third. Hockinson wants a win so that next week’s game vs. Washougal could potentially be the No. 3 playoff.

Players to watch: For R.A. Long, you may have heard of Jacob Yordy. He had four more TDs last week against Hockinson. For Ridgefield, Josh Mason was a bright spot for the Spudders last week with his 60-yard interception return.

Game notes: R.A. Long is looking to rebound strong after a close call last week against Hockinson. Ridgefield is looking for something positive to take into next season.

When, where: 7 p.m., Longview Memorial Stadium

Players to watch: For La Center, Connor Fulton is the Wildcats’ leading rusher, but also plays good defense. He had an interception return for a TD last week. For Toledo, Taylor Hicks rushed for 80 yards last week.

Game notes: Win or lose this week, La Center will play for the Trico League title next week against Woodland. That might be the only thing going for Toledo, which will be eliminated from the playoff hunt with a loss.

Players to watch: For Seton, Will Noce-Sheldon has been battling injuries. For the Cougars to stay close, they need a healthy QB. For Kalama, Colton Aschoff had 138 yards rushing and two TDs against Toledo.

Game notes: Kalama finishes the regular season with the bottom two teams in the league: Seton and Ilwaco. That puts the Chinooks in excellent position to lock up the No. 3 seed to the playoffs. Seton will complete league play this week before ending the season with a non-leaguer. The Cougars earned their program’s first win last year against Kalama.

Players to watch: For Woodland, Eli Whitmire can do it all for the Beavers, play good defense, run the ball and he even had a 55-yard TD reception last week.

Game notes: White Salmon can clinch a playoff berth with a Toledo loss to La Center. The Bruins are hoping to catch a break and move past Kalama for the No. 3 spot. Woodland is headed for a Week 9 showdown with La Center.

Players to watch: For Stevenson, QB Brandon Van Pelt threw for 299 yards and a TD in last week’s loss to Woodland.

Game notes: First-year coach Eric Snelson has turned Rochester into a playoff contender after a 2-7 season last year. Stevenson has the offense to win this non-leaguer on the road.