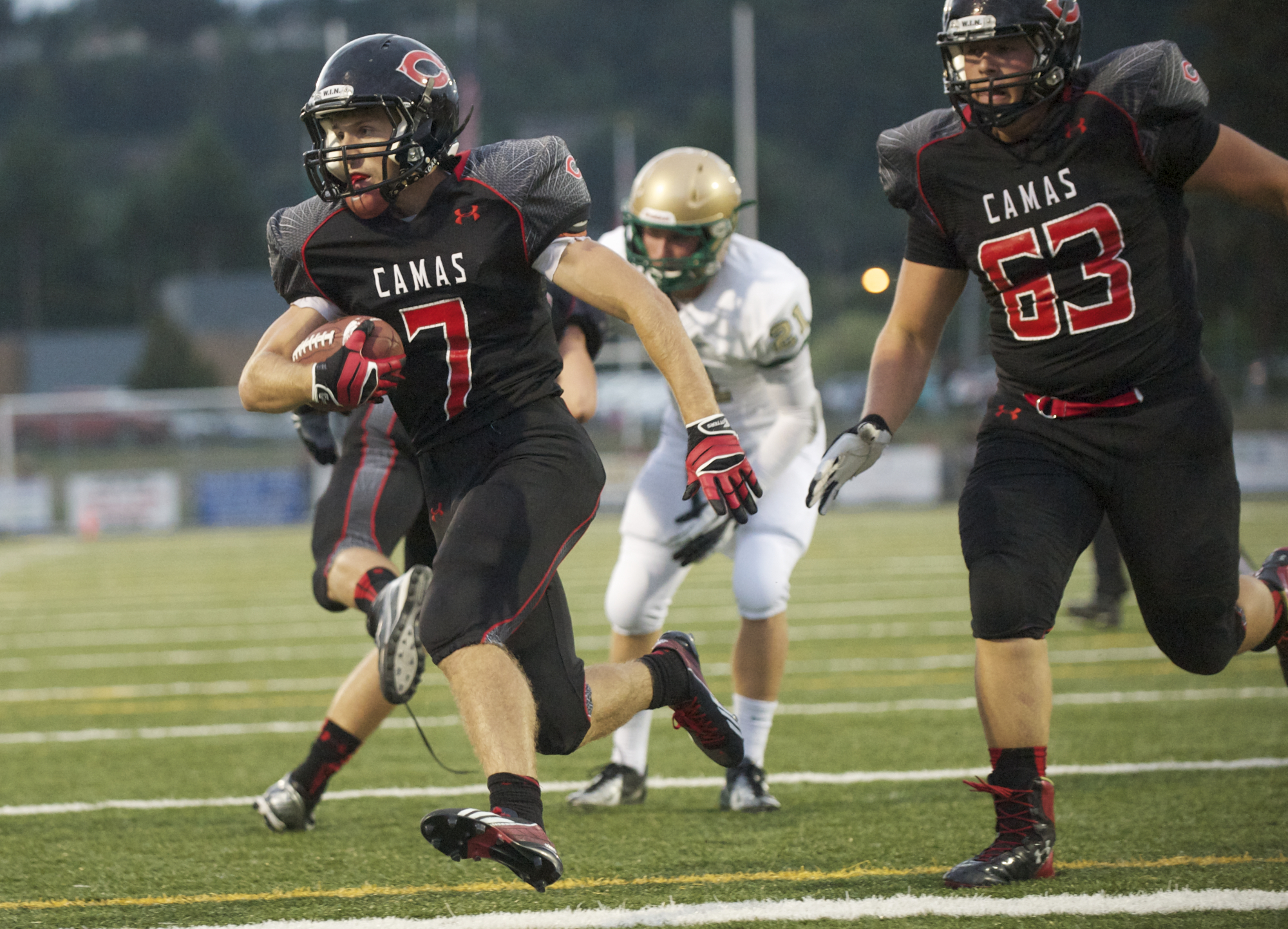 So, did you happen to see the final score of last week’s Union-Battle Ground game?

Oh wait! I know. That was our predicted score of the Union-Battle Ground last week.

There are two schools of thought on The Columbian sports staff regarding our weekly prep football picks.

One school of thought says that we shouldn’t do it, because of all the grief we would subject ourselves to from fans, coaches and players, particularly if our picks are dead wrong.

The other school of thought says we shouldn’t be weenies.

Luckily, the anti-weenie school of thought won out, and we’ve been picking prep winners for about six years now.

A couple of years ago, we added the wrinkle of predicting the final score.

But up until last week, we had never actually predicted the correct final score. We’ve been close on occassion, but never spot on.

And when the halftime score between Union and Battle Ground was 35-21, it didn’t look like we’d hit that score either. But when neither could move the scoreboard in the second half, we had hit our first perfect score.

That game was part of another perfect week of winners: 12-0 again.

Our perfect weeks probably speaks less to our prognosticating ability than it does the predictability of area leagues.

But this week there are some good matchups can could potentially shake things up.

Players to watch: Skyview RB Nate Arriola played a huge role in Skyview’s win over Heritage, dominating the game late. RB Justin Straup was the bright spot in a lopside loss to Camas. He’ll need another big game to keep the pressure off his Evergreen teammates.

Game notes: Turnover have played a huge role in Evergreen’s 0-2 league start. If the Plainsmen hope to make a push to the postseason. This is a must-win game. And they can’t turn the ball over. Skyview is starting round into a playoff team.

Players to watch: Watch Union QB Nolan Henry. Yes, RB Leon Siofele is the rushing leader in Clark County by a longshot. But teams that hope to win by running on the Camas defense have found disappointment. Henry should play a key role for the Titans. For Camas, it’s WR-DB Zach Eagle. He’s one of QB Reilly Hennessey’s top targets on offense, he’s a playmaker as a defensive back and he can hurt teams on special teams, too.

Game notes: The Papermakers are looking for a game in which they are pushed for four quarters. No team this year has managed to keep Camas from building a 40-point lead on them. Union appears to be the best-equipped team in the 4A GSHL to prevent that from happening. But actually beating the Papermakers? On their home field?

Players to watch: After Heritage got rolled over by Skyview’s Nate Arriola, Battle Ground will look for big things from RB Justin Smalley. Heritage’s Tiger Geeslin has the speed to impact the game rushing the ball or in the return game.

Game notes: Heritage QB Loren Standiford was knocked out of last week’s game with concussion-like symptoms. If he is not cleared to play this week, that will make thing particularly tough on the Timberwolves. Battle Ground will seeking a bit of revenge after losing a heartbreaker to Heritage last season when the Tigers appeared to score the game-winning TD late twice, only to have the officials to rule them short both times.

Players to watch: Columbia River’s Nathaniel Hawthorne is the Chieftains’ No. 1 receiver with 227 receiving yards and four TDs. Last week, he was a factor on special teams with a 75-yard punt return. It seems whoever the Falcons put in the backfield, they produce. Last week, it was Ronnie Evenden again with 254 yards.

Game notes: At the start of the season, this game was thought to possibly have league-championship ramifications. Despite all of Prairie’s troubles, it still could be. But in order for that to happen, the Falcons will contributions from everyone.

Game notes: Mountain View is rolling and the Thunder don’t figure to stop until a Week 9 showdown with Columbia River.

Players to watch: Look for a big game for Kelso RB Lloyd Melone. Fort’s Marquis Taylor has 21 catches for 375 yards and two TDs this season

Game notes: Kelso looks to rebound from a loss to River.

When, where: 7 p.m., Longview Memorial Stadium

Players to watch: Hockinson QB Jess Krahn has passed for 1,183 yards and 9 TDs. He completed 30 of 57 passes last week. R.A. Long’s Jacob Yordy has been a touchdown-scoring machine for the Lumberjacks.

Game notes: The Hawks’ first trip to Longview this year didn’t go so well. It doesn’t figure to get much better this time.

When, where: 7 p.m., Ridgefield High School

Game notes: Mark Morris is a top-10 program in Class 2A and shouldn’t have much problem with the winless Spudders.

Game notes: Despite being 0-2 in league, Aberdeen appears to be the third-best time in the 2A GSHL. The Bobcats played 2A GSHL frontrunners Mark Morris and R.A. Long tight. Aberdeen depends on its tough defense to win. Bad news for the Panthers.

Players to watch: Woodland’s Eli Whitmire has rushed for more than 600 yards this season and we haven’t even seen what he could when he stays in the game for a full four quarters. Josh Anderson rushed for 69 yards and TDs last week for Stevenson.

Game notes: We don’t figure to see Whitmire in the game for four quarters this week either.

Game notes: Seton QB Will Noce-Sheldon sat out last week’s game with a thumb injury. If he doesn’t play this week, it could get ugly quick for the Cougars.