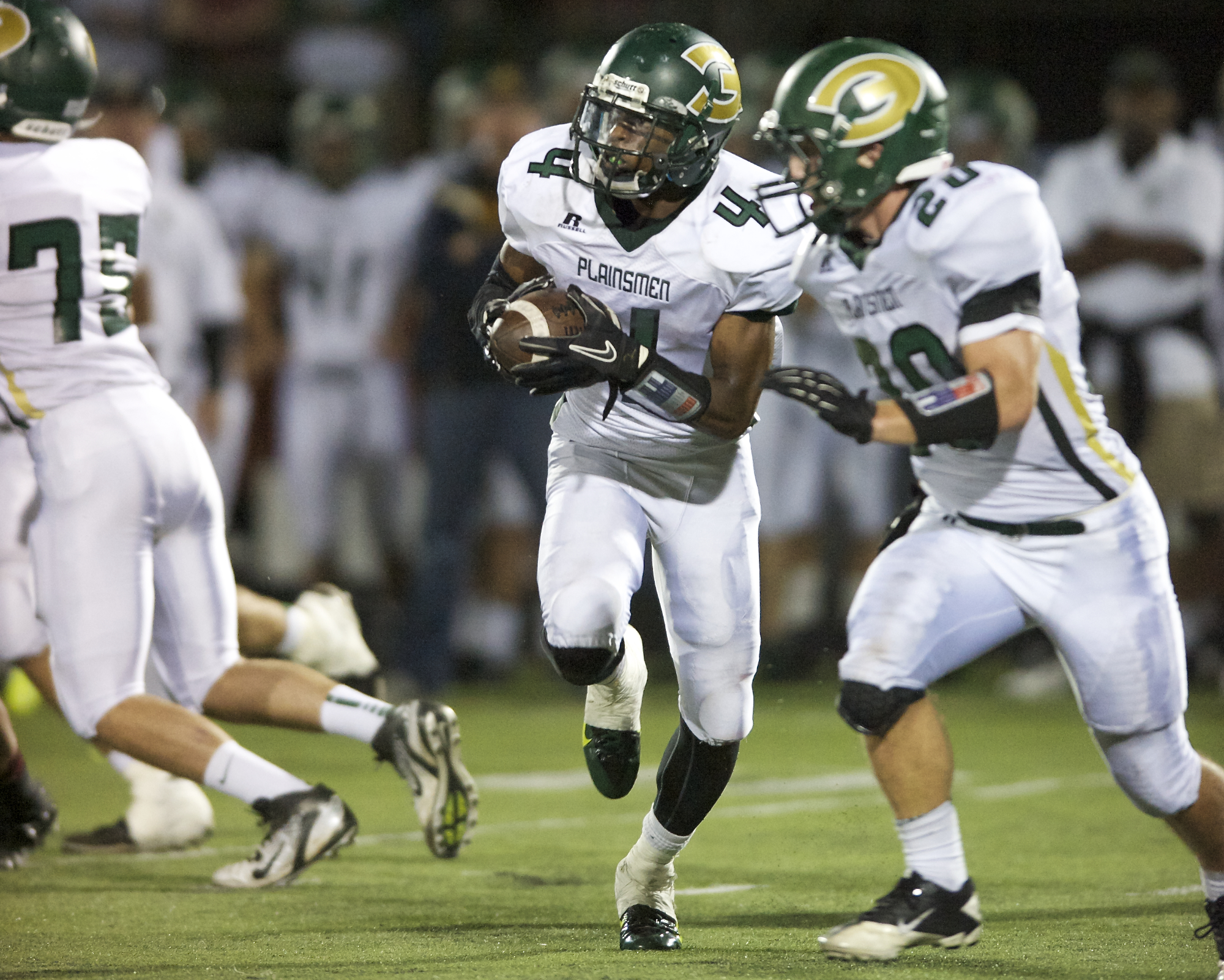 Evergreen’s Robert Akil runs the ball against Prairie in the second half at District Stadium on Friday September 20, 2013. (Zachary Kaufman/The Columbian)

So is it wrong to feel bad about going 14-2 in our picks last week?

It’s just that every time I saw a score, it wasn’t what I expected.

We picked Stevenson to win, but not by 61 points.

We picked Woodland to win, but not by 45 points.

We picked Skyview to win, but not by 42 points.

We picked Heritage to win, but not by 40 points.

Luckily, our scores were all terrible.

Of course, the two teams we incorrectly picked to win were eventually shut out.

OK, so now it’s league play for the 4A, 3A and 2A GSHL. Time for games that really mean something.

Game notes: The winner of this game likely will position itself nicely to claim one of the three playoff spots. The loser faces a long, uphill battle to the postseason. It would be easy to apply the common opponent and say Evergreen has the edge (Evergreen beat Prairie and Prairie beat Battle Ground). But it’s not that simple. The Tigers have made strides to show their attack is more balanced. Evergreen is not quite there yet.

Game notes: Heritage’s confidence is high, coming off a lopsided win last week. However, the Timberwolves were aided by five fumble recoveries. They shouldn’t expect such charity from Union.

Players to watch: The Camas offense runs through QB Reilly Hennessey, who has passed for an area-best 1,113 yards and 12 TDs. Skyview’s offense has made big improvements after stumbling to an 0-2 start. WR Jacob Dennis has 24 receptions for 319 yards.

Game notes: Skyview once ruled the 4A GSHL. But now, the road to the league title runs through Camas.

Game notes: Columbia River is looking to regroup after a disappointing loss to W.F. West. That’s not good news for the Trappers.

Game notes: Bay’s win last week snapped a 12-game skid and provided the Eagles with a big boost. But with Kelso at home and looking to build off successes last week vs. Evergreen, it might the Hilanders’ turn to get off the skid.

Players to watch: The Falcons like to run the ball, even Ronnie Evenden carrying the load and Dallas Goodpaster pitching in. But Mountain View also has a potent 1-2 punch in the ground game with Preston Jones and Austin Mace.

Game notes: With two teams that like to run the ball, the big difference may come in each team’s ability to complete some big passes. And right now, Mountain View appears to have that edge.

Players to watch: Josh Mason had a solid game for Ridgefield last week with 93 yards rushing and a TD. Hockinson is led by senior QB Jess Krahn.

When, where: 7 p.m. at Longview Memorial Stadium.

Players to watch: Washougal’s Bobby Jacobs is having a solid season with 497 yards and 4 TDs. R.A. Long’s Jacob Yordy is a touchdown-scoring machine.

Game notes: The Panthers got off to a solid 3-0 start before things took a turn for the worse at Rainier last week. Washougal should have more success moving the ball this week, but keeping up the potent Lumberjacks will be a challenge.

Players to watch: La Center’s Connor Fulton and Max Hiller have scored 5 TDs each, while Fulton leads the team in rushing (430 yards). White Salmon QB Tanner Rabinowitz leads an offense that were prefer to run, but can throw it.

Game notes: White Salmon likes to grind out wins through ball control and defense. But the Bruins will be hard-pressed to contain and then keep up with the Wildcats.

Players to watch: Eli Whitmire can score at any time, in any way: running, catching, returning and on defense. Tom Orneal did rush for 100 yards in a loss to Toledo.

Game notes: Ilwaco was been shutout by La Center and Toledo this season. Yeah, that’s about right.

Players to watch: Seton Catholic’s Will Noce-Sheldon has run for 300 yard and passed for 410. Toledo’s Taylor Hicks rushed eight times for 106 yards last week, and three of those runs ended with him in the end zone.

Game notes: After posting the second win program history, Seton Catholic has been outscored to the turn of 135-0 in the past two weeks. The Cougars could get nothing going through the air in rainy conditions last week. The forecast is better this week … at least as far as the weather is concerned.

Game notes: After scoring only six points in each of its first three games (all losses), Stevenson broke through with 61 last week. Kalama, when not facing Woodland or La Center, plays pretty good defense.