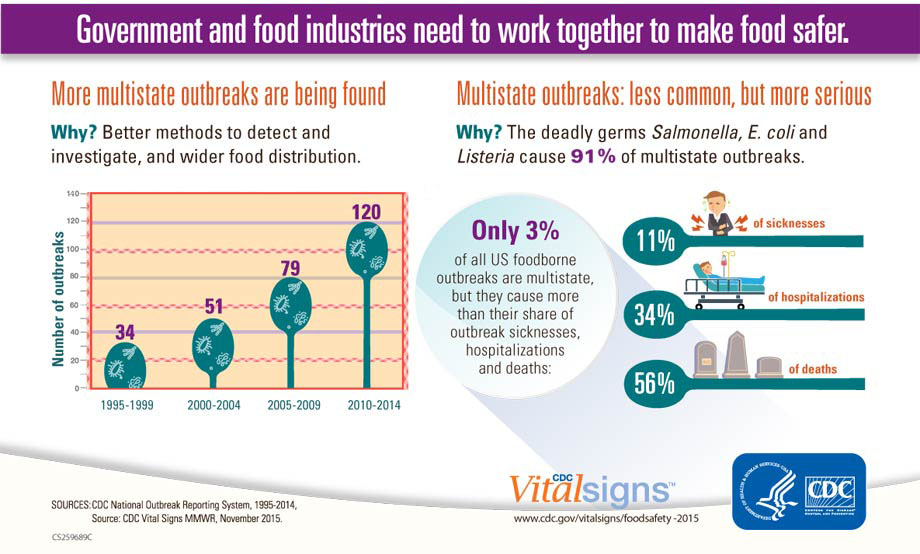 Multistate food outbreaks may be becoming less common, but they cause more illness, hospitalizations and deaths than other foodborne outbreaks.

A new report by the Centers for Disease Control and Prevention looks at the prevalence of multistate food outbreaks and the impact of those outbreaks.

Foods that cause multistate outbreaks are contaminated before they reach a restaurant or a person’s home – meaning even safe food-handling practices can’t prevent the illness.

Each year, an average of 24 multistate outbreaks (each involving two to 37 states) are reported. Right now, Washington and Oregon health officials are in the midst of an E. coli outbreak linked to Chipotle restaurants in the region.

Nearly all multistate outbreaks (91 percent) are caused by the types of germs: Salmonella, E. coli and listeria, according to the CDC.

The bright side, according to the CDC report, is that outbreak investigations lead to safer food.

When the CDC launches a multistate outbreak investigation, food regulators work to trace suspect foods back to the source, health officials interview people about their illness and what they ate and, together, they work with the involved companies.

When companies issue recalls and fix the source of contamination, other food regulators and companies that produce similar products take notice. They improve practices, which then prevent future illnesses and outbreaks, according to the CDC report.