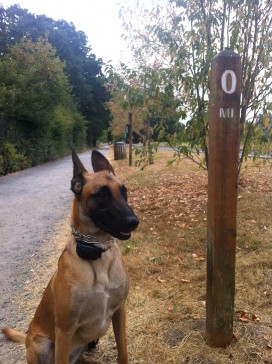 Americans’ waistlines aren’t the only things suffering as a result of the U.S. obesity epidemic. Our pets’ health is also taking a hit.

Nearly 70 percent of adults are overweight, and more than 35 percent are obese, according to the Centers for Disease Control and Prevention.

When it comes to our four-legged friends, about 53 percent of dogs and 58 percent of cats are overweight or obese, according to the Association for Pet Obesity Prevention (yes, such a group exists).

Health officials in Los Angeles are hoping to address both people and pet obesity.

“You look at pets, and they look like their owners,” Karen Ehnert, acting director of veterinary public health for the L.A. County Department of Public Health, told the Los Angeles Times. “We envision that by improving their pet’s health, we can improve the family’s health as well.”

A coalition of veterinarians, doctors, health educators, animal trainers – they call themselves “Healthy Pets, Healthy Families” – is designing health education campaigns and setting goals, which include reducing the number of pet owners who smoke and increasing the proportion of dog owners who go on daily walks, according to the Times.

Ehnert, who is leading the coalition, wants owners to think more about what both they and their pets eat and to view their dogs as exercise buddies, according to the Times.

The Times tells the story of one owner found out her dog was obese and needed to lose weight. In the process, the owner dropped a few pounds herself.

“If I didn’t have her, I wouldn’t own a pair of tennis shoes,” she told the Times. “It’s really unbelievable how she’s motivated me.”

Just this morning, my own four-legged exercise buddy motivated me to go for a run. As I laid in bed hitting the snooze button, Nema – my 1 ½-year-old Belgian Malinois – whimpered at the side of the bed.

For the last year, I’ve been taking Nema running with me. For the last couple months, we’ve been getting up at 5:30 for a nice, cool morning run.

I skipped our Monday run. Nema wasn’t going to let me get away with it two days in a row. So, off we went.

Safe to say, Nema has helped me stick to a running schedule I might otherwise be a little more forgiving toward. Here’s Nema on Sunday, after finishing her first 7-mile run.

In related pet news: Pet centers that once focused on obedience training and boarding are now serving as a “fat camp” for pups.

Time NewsFeed explains: “The vets at the Morris Animal Inn in Morristown, N.J., for example, offer swimming and “canine cardio” (running on treadmills or up and down the stairs), along with daily check-ups and weigh-ins. Dogs are rewarded for their hard work with healthy snacks, like yogurt parfaits and a dip in the doggie jacuzzi if they’ve performed well.”

“The Indigo Ranch in Vernonia, Oregon offers a 4-week, $800 program in which dogs are fed ‘low-calorie, high fiber food and treats’ and put on an exercise regimen ‘that gradually gets your dog in shape and allows optimal calorie burning,’” according to Time.