Why Do Sleeping Cats Cover Their Faces? 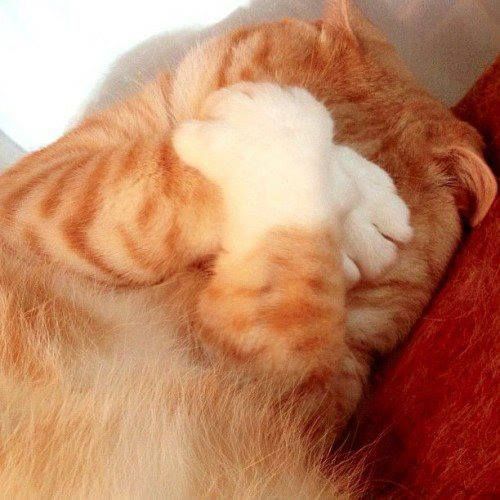 Whatever their purr-ferred position, cats typically sleep with their paws over their faces. While obviously comfortable and undeniably cute, why DO our feline friends cover their faces when they sleep? Here are some of the most plausible explanations for this behavior.

One reason is warmth. When they’re asleep, they lose more of their customary body heat due to the fact that they’re lying still. And since most of that heat comes from their paws, ears and the tips of their noses, covering their faces with their paws or curling themselves into a ball helps keep that essential heat inside while they sleep. They also instinctively curl themselves up more tightly in winter because the cold can be dangerous for them. Should their body temperature drop below a certain level, they can get hypothermia, which, in worst case scenarios, can lead to coma and even death.

A second reason is it blocks out the light. Since cats are crepuscular — most active during the twilight hours – by nature, they spend most of their days sleeping. This means they must sleep when it’s light outside, often in direct sunlight thanks to its soothing warmth, and they use their paws to cover their eyes the way we humans use sleep masks.

A third reason is it blocks out noise. For most cats, even the slightest noise can wake them from their slumber. An instinct born as a survival mechanism for cats living in the wild, they would snap awake at the slightest noise, and if that noise meant danger, they could swiftly flee. How likely your own cat is to be wakened by a loud noise depends on how deeply she sleeps and how well her ears are covered.

A fourth reason is a sense of security. While cats, primarily outdoors and feral cats, are predators, hunting birds, mice and other small rodents, cats in the wild are the prey of many larger animals. Most vulnerable when asleep, their faces are vulnerable too, and should their faces be attacked, these cats’ chances of survival would be slim. And although your inside cat isn’t in danger of being attacked by a predator when she’s asleep, this behavior is, once again, instinctual. A fifth reason is exhaustion. Cats don’t only use their paws to cover their faces when they sleep, they also use their paws to self-groom. Obsessively devoting nearly one third of the day to grooming themselves – a tiring feat in and of itself – if they fall asleep in the middle of washing their faces, their paws will land directly over their eyes. The very act of moving their paws down in order to sleep may, quite simply, be too much of an effort for them.

Last, but not least, your cat may be covering her face while she’s sleeping as a hint to the rest of her loving household that she needs her space and purr-fers to be left alone. Think of it as an unwritten “Do Not Disturb” sign and respect your favorite feline’s wishes. Rest assured: she’ll amply reward your thoughtfulness when she wakes up.